We fished with Bill Saiff III out of Henderson Harbor, NY. We fished in 150-155 feet of water. Typically, we tried for King Salmon. We were fishing the temperature change line at a depth of 120-135 feet for Salmon. At midday, we switched our gear to fish for Lake Trout. We fished for those at 150 feet. They are easier to catch as well. We reached our limit on Lake Trout (2 per person) within an hour. Then, we switched back to salmon gear and fished at the shallower depths. I fished with my brother Zachary Field (Durham, NH), my father Sumner Field III (Gray, ME) and his friend Bruce Stubbs (Brooks, ME). Bruce has done this trip before. Bruce landed a 41-inch King Salmon on Tuesday. 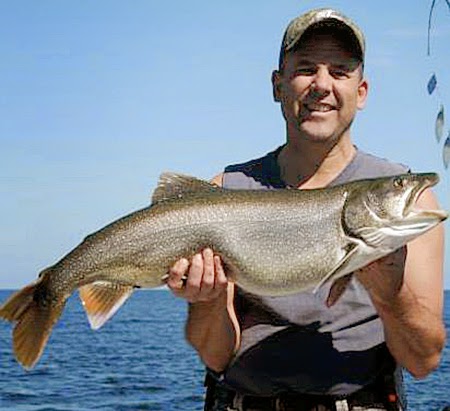 Bill Saiff III not only runs a fishing charter service. He owns the Westview Lodge which also has a restaurant and bar. He owns six boats and has two independent captains for a total fleet of eight boats. In September, he begins his “Surf and Turf” charters. Fishing in the morning, goose and duck hunting in the afternoons. Saiff is a fantastically positive individual. He runs a charter service, a restaurant, a bar and plays in a band. Wednesdays are “Wing Night” at the Westview. Bill and his band played as well. So, after we fished with Bill for 9 hours, he showered, grabbed his guitar and played for a few hours. He typically puts in 18 hour days from April to October. I honestly don’t know how he does it.
Our catches included one Brown Trout caught by me. King Salmon, Steelhead Trout and Lake Trout. Our catch was evenly distributed amongst the four of us. Cost to fish with Bill for one day is $200. For my birthday in 1998, my Dad gave me a hand written note “You are invited to a fishing expedition at a time of your choosing, choice of lake is optional. No expiration. Love Dad” I cashed it in for this trip! My Dad was amazed I still had the note. He had forgotten about it. He honored it.

Posted by Michelle Libby at 4:58 PM