It isn’t every day that a movie star rides into our hearts, especially at the Maine State Society for the Protection of Animals. Nonetheless, that is just what happened recently on an otherwise ordinary day in our horse shelter world. For fans of “Airplane!” “Airplane II: The Sequel”, “Lost In America”, “A Master Builder” and her other movies, performances by Julie Hagerty Kagan are unforgettable. As the sweet, but spacy stewardess Elaine Dickinson in the hilarious “Airplane” movies of the 1980s, Julie became an iconic part of a decade of great comedies. 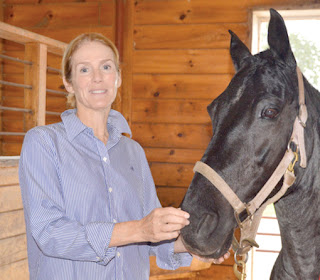 Fast forward to 2015 and meet this charming, compassionate woman, who doesn’t take herself too seriously and understands the importance of rescuing and rehabilitating abused or neglected animals. Julie and her husband Richard are animal rescuers who cherish an adorable shelter dog named Rudy. When Julie was asked what breed of dog he was, she smiled and said, “Oh, he is a very special breed, a uniquer.” Given the life of love and quality care that Rudy lives as a pampered member of Julie and Richard’s family, he is uniquely fortunate as well.

Julie and her husband are also horse lovers and equestrians. They have owned four horses, all of whom have required some level of rescue efforts. Their first rescued horse, a gelding named Danny Boy, lived for ten years following emergency colic surgery, for which Julie and Richard paid for in order to save the horse’s life. Absent the Kagans’ generosity and financial intervention, the horse would have been euthanized at the stable where Julie met and fell in love with him. 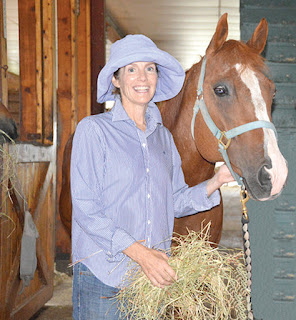 The Kagans divide their time between Los Angeles and Maine. In addition to her acclaimed roles in “Airplane!” and its sequel, Julie has appeared in other movies and many television shows, including “Everybody Loves Raymond” and “Family Guy.” Richard is a leading Los Angeles insurance executive and the former chairman and president of Center Theatre Group, one of America's largest non-profit theater companies, whose belief is that the art of theatre is a cultural force with the capacity to transform the lives of individuals and society at large. When this down-to-earth and friendly power couple came into the barns at the MSSPA, everyone took notice, including the horses. “She definitely has a way with horses,” observed MSSPA president Marilyn Goodreau as she introduced Julie to the Society’s most recent resident, a lovely Standardbred gelding who was seized from an abusive owner in June 2015.

Julie has brought friends to meet the horses, volunteers, and staff at New England’s largest horse shelter. She is enthusiastic about helping to raise the visibility of the organization, its mission of rescue and rehabilitation, and most of all, the horses there seeking adoptive homes. Although we don’t meet celebrities like the Kagans every day, we do meet people from all across Maine and the country who love horses and care about the Society’s mission. We feel most fortunate to add the Kagans to the Society’s family of friends and supporters.
Posted by Michelle Libby at 5:22 PM