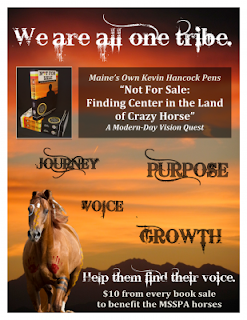 In bringing his self-awareness to a place of public discussion through his extraordinary book, Not For Sale: Finding Center in the Land of Crazy Horse, Maine businessman Kevin Hancock speaks to each of us.  His premise of interconnectedness and its impact on the power of a single individual to create fundamental change comes to life for the horses at New England’s largest horse shelter through a remarkable fundraising opportunity.

Don’t miss the chance to own the book and read Kevin’s message of universal family while donating life-saving dollars to a herd of horses, once abused and neglected.  For each copy of Not For Sale: Finding Center in the Land of Crazy Horse purchased online at:

http://kevindhancock.com(enter the promo code: MSSPA), Kevin Hancock will donate $10 to the horses at the Maine State Society for the Protection of Animals in South Windham. 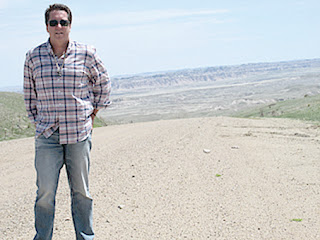 A gift for yourself or anyone you love, this remarkable and unexpectedly spiritual book is a catalyst for using what’s on the inside of us to reshape the outside world around us.  Learn more about the non-profit horse shelter by visiting www.msspa.org and consider the possibility that we are all one tribe and part of the one herd. 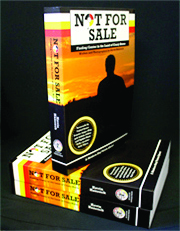 Posted by Michelle Libby at 6:04 PM No comments:


Former handyman icon, now real estate developer Kaile Warren has dropped plans to convert the aging Odd Fellows Hall in Windham into an upscale arts and community center. Warren said he commissioned an engineering firm to inspect the building and, as he put it, “The property failed.” He said the report showed problems with the roof and wall timbers which form a single unit, resulting in the building “…caving and coming forward.” The bottom line, according to Warren, was that repairs to the structure would run about 30 percent more than tearing it down and starting over.” Warren said he submitted a lower counter-offer for the property, but it was rejected. 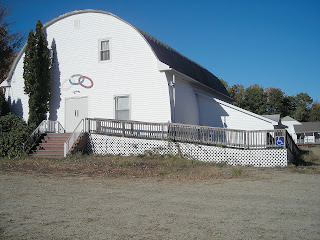 The property is owned by Lake Pine Association, which handles management and maintenance for the Odd Fellows and Rebekahs fraternal organizations that aid groups and individuals in need of help. President Janet Waterhouse told the Eagle that while the Odd Fellows portion of the organization no longer functions, the association represents 10 or so remaining members of the Rebekahs. Waterhouse said the association declined Warren’s counter-offer because it was too low, and because she is “not so sure” about the engineer’s conclusions.

Waterhouse maintains that the stanchion form of construction utilized when the hall was built in the 1950s is considered unconventional today.

“It’s possible they’re not familiar with that kind of structure,” she said, and added that the association may choose to hire its own engineer when their board meets next week.

“I’m really disappointed because (Warren) was going to do wonderful things (with the building),” said Waterhouse.

Warren had planned to transform the hall into an upscale community center under a business model he called FACE, an acronym for Fundraising (non-profits), Arts (theater groups, artists), Cultural (including multicultural events), and Entertainment (celebrations, seminars).

Neither side discussed financial details, but following the rejection of his counter-offer, Warren said, “I was deeply touched by the history of the location (which he had vowed to preserve), (but) the situation is, that as a pragmatic businessman, deals have to make financial sense. I wish the Rebekahs nothing but the very best in their efforts to keep the building standing.” Warren said he will expand his search for a FACE venue both within and outside of Windham.

Waterhouse said that despite their reduced numbers, the Rebekahs will continue to meet either in rented space or in members’ homes to pursue their mission of supporting local charities and those in need.
Posted by Michelle Libby at 5:57 PM No comments: 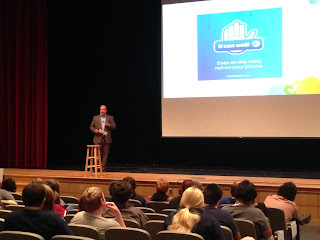 Teen driver safety is a serious issue. According to the National Highway Traffic Safety Administration, traffic crashes are the leading cause of death for teens. AAA research has shown that for every driver age 15 to 17 killed in a crash, there are nearly two other road users killed, including other drivers, passengers, pedestrians and cyclists. Teen driving crashes cost society billions of dollars in annual medical expenses, lost work, property damage, and lives are forever changed. The unique challenge presented by teen drivers has been recognized over and over again and Windham High School has focused in on distraction in preparation for National Teen Driver Safety Awareness Week October 18 through October 24. 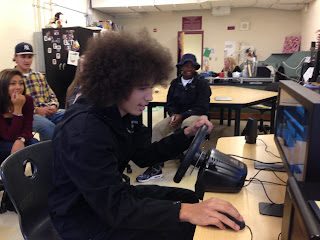 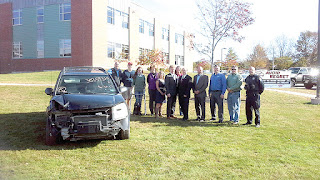 On Oct. 14, Windham High School hosted a special informational day aimed at curbing teen driver crashes. AAA Northern New England and AT&T joined forces to deliver a powerful message with a number of interactive activities throughout the day. AT&T presented the "It Can Wait" campaign, which warns against texting, web-surfing, emailing and other forms of potentially dangerous smartphone use while driving.

AAA engaged students in a number of hands on activities with the opportunity to experience a distracted driving golf cart cone course and distracted driving simulator while being quizzed on laws and best practices related to teen driver safety. The Windham and Scarborough Police Department manned “The Convincer” a sled in which a student can buckle up and experience the force of a 5 mph crash. 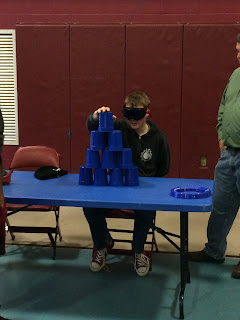 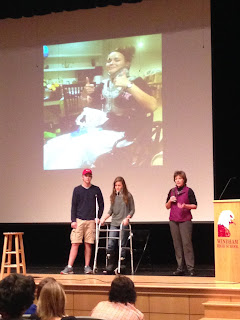 After the morning activities, event organizers; health teacher Melissa Dubois, school resource officer Jeff Smith and assistant principal Kelli Deveaux ushered students and teachers into the auditorium for a presentation by prominent speakers. The speakers included Secretary of State Matthew Dunlap and Windham’s Senator Bill Diamond (Senator Diamond is a traffic safety champion and responsible for introducing many of Maine’s distracted driving laws). Secretary Dunlap and Senator Diamond spoke passionately about distracted driving and the importance of breaking this tragic habit in society. Senator Diamond encouraged students to talk with their parents and inspire them to eliminate the intoxicating behavior also. 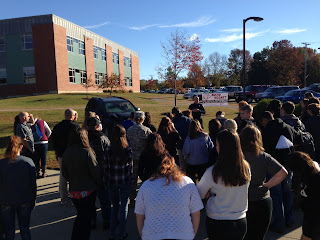 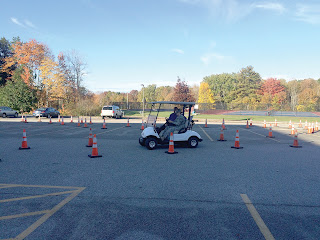 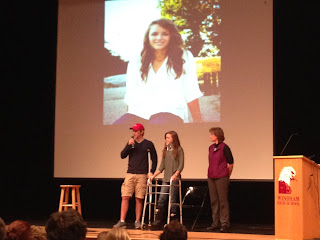 After the speakers concluded AT&T vice president Owen Smith administered an informational presentation on the frightening statistics related to teens and distracted driving. The AT&T presentation culminated with a powerful video “The Last Text”. The silence following the video was profound and at that point the only thing that could have brought home the message further was watching Kaylin Cook and Ben Tracy make their way slowly onto the stage, Ben was using a crutch and Kaylin steading herself with a walker and supported with two walking boots and a prominent spinal brace. Kaylin and Ben quietly shared their story of the day their lives were forever changed by a distracted driver. The collision occurred this past August when an SUV crossed the center line on Route 302 and hit them head on, resulting in Ben having a badly damaged leg and Kaylin requiring brain surgery and 8 weeks in a wheelchair prior to being able to get around with the walker. The couple was joined on stage by Kaylin’s mother Suzanne Grace the founder and executive director of the Tall Pines Safety Resource Center a nonprofit charitable organization in Maine dedicated to providing education and information to reduce the incidence of unintentional injuries. Grace spoke of how she works to help educate parents on how to keep their children safe and how she almost lost her daughter in this horrible crash. 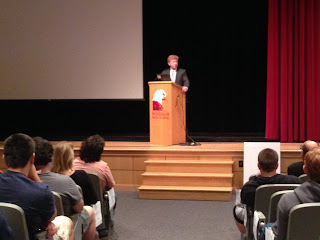 The theme for National Teen Driver Safety Week is “Avoid Regret” and event organizers hope that the experience will help Windham teens make responsible decisions behind the wheel and speak up if they are a passenger or friend. TDS week is an opportune time for parents to speak to their teenagers about motor vehicle safety so they too can “Avoid Regret”. For more information about teen driver safety visit www.teendriving.aaa.com, www.Tallpinesafety.org and www.itcanwait.com.
Posted by Michelle Libby at 5:54 PM No comments:


It’s finally here! The time of year we both love and hate. It signals the end of the warmth of summer and the beginning of the slow decline to the cold of winter. It also starts the beginning of the invasion of what is called occasional invaders. These are the insects that make their way in to your home to escape the cold weather.

Some of these insects are spiders, cluster flies, lady bugs, western conifer seed bugs and crickets. Although these insects don’t do any damage some of them can invade in very large numbers. In some homes I have seen hundreds of these insects emerge on a warm sunny day in the middle of the winter. Mother Nature has tricked them into believing that springtime has begun so out they come. If you do experience this you don’t want to start spraying pesticides. You can put yourself in harm’s way and in the case of lady bugs put them into distress and cause them to leave a defecation trail on your wall as they wander off to die. Simply vacuum them up instead. 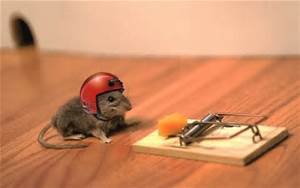 There are some things you can do to lessen or eliminate this invasion. Sealing up any cracks or holes is a must. Use a quality caulking or for bigger spaces, foam. Check for old holes left open from the removal of wires or pipes. Sometimes you need to get dirty and check where your house sits on the foundation as things have settled and spaces have opened over time. Check your attic vents as the insect screening can deteriate or get ripped and allow easy access.

One of the biggest entry points is doors and windows. Make sure your door weather stripping is in good repair and replace it if not. This will also save you some money on heat. As to windows you can’t really seal them up, but I have come up with an easy fix for these invaders. Once things have cooled off enough which is usually the middle of November, take your vacuum and open a window and suck up the insects on all the exposed surfaces both top and bottom of the window halves. That way there are no insects to come in on those warm winter days.

If you do experience an invasion look at the positive side, winter is probably halfway over and we are closer to those warm days of spring.
Posted by Michelle Libby at 5:07 PM No comments: