Ariana Foster takes home the crown in her first pageant


Ariana Foster competed in her first pageant last month as a 13-year-old. She is an eighth grader at Windham Middle School. 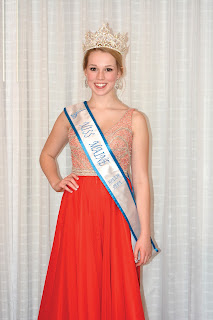 Ariana has been dancing recreationally and competitively since she was four and wanted to take a break from that and try something new. She hopes to one day teach disabled children to dance, so I am sure she will be right back at it when the time is right,” said her mom, Eleanor Foster, but for now she is busy with school, drawing, painting, teaching herself sign language and now pageants.

Ariana will be representing the State of Maine for the next year and is required to perform community service work and/or make appearances at least twice a month. This month she will be visiting a local daycare during their holiday party and performing a reading and assisting the children with a craft, then gathering and donating the food she collects from her friends and family to the Windham Food Pantry, which is already a family tradition.

Posted by Michelle Libby at 4:14 PM