Part 4 - Deck the halls with Christmas wonder - By Michelle Libby


The ride home was awkward. Sophie had jumped out of the car and climbed into the backseat to allow Branson and him to talk on the way home. He was grateful that she understood how important his son was to him. 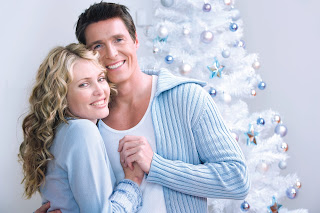 Branson didn’t acknowledge Sophie at all, which irked him, but he said nothing about it. Yet.

When Darron pulled the car into Sophie’s drive, Branson looked at him questioningly.

“Why are we here?” he snapped.

“I live here,” Sophie said in a clear voice, leaning toward Branson. “Thanks for the ride and dinner.” She opened the door and slammed it behind her.

“Cool place. It’s on the water? It would look so cool with Christmas lights. Don’t you think, Dad?”

“I put the lights on, they just don’t work. Just leave it. You’ve done enough to cause problems tonight,” Darron mumbled as he climbed out of the car and followed Sophie to the door.

“Don’t make this more awkward,” she told him.

“I had no idea that he was going to be like that,” Darron said catching up to her on the front porch.

She crossed her arms. “Did you think he was going to run up to me and yell ‘mama’? He’s a teenage boy, and I’m just a third wheel. Thank you for dinner.”

“Can I see you again?” He reached out to rest his hand on her sleeve.

She looked down, then back up to his face. He felt his heart shudder, she was going to give him the brush off. “Maybe you should concentrate on your son.”

He saw the pain in her eyes and wanted to make her understand he was torn. He wanted to be with her, and his son. He hadn’t known her long, but he felt a connection. Branson would grow to like her too. He knew it. He just needed her to realize it.

“I’m not giving up on us,” he said softer leaning in.

“There is no us,” she answered, shaking her head.

At the same time the Christmas lights lit up all around them turning the dark bright. On the porch, bushes, around the windows, it looked like the gingerbread houses from her youth.

Darron stepped back to admire his handy work.

“Dad, I found the problem with these. There was a missing lightbulb. It was easy to fix,” Branson said, coming around the corner. “You did a good job on these.”

“Yes. I decorated it. But, Sophie doesn’t want them lit.”

“What? Why the heck not? They look awesome. You should see the house reflect off the water.”

Sophie started to speak, but the two of them talked over her. She let them for a minute or two and then cleared her throat loudly.

“I don’t mind the lights tonight. As much.”

“I don’t hate it. It just get tired of it after all the preparations I have to make at the shop. I never said I hated it.”

Branson joined them on the porch. “I like Christmas,” he told Sophie.

“I’m old enough to fight for my country,” he said defensive. “I’m not a kid.”

Sophie reached for the door. “Good night. Enjoy your time together.”

Sophie turned at the same time Darron did. Branson?

“Maybe we could come in. I was a jerk in the car and I’m sorry. I didn’t expect my dad to have a girlfriend.”

“Okay. We’ll this is a story I have to hear.” Branson reached around Sophie and opened the door.

Sophie stood on the stoop, her head cocked sideways, wondering what the heck just happened. The kid did a 180. One minute he was sullen and ignoring her and the next he was inviting himself in.

Darron slid his arm around her shoulders. “Don’t even try to figure out the 18-year-old brain. It’s impossible.”

“Did you say anything to him?”

Darron shook his head and gave her a little push in the direction of the open door.

Branson was already sitting on her couch with his shoes off and his feet up. She was surprised he hadn’t raided the fridge and opened himself a soda, if she had any.

“Make yourself at home,” she said under her breath.

“Did I mention I was a jerk? Do you know how long it takes to get here from college? A long time. And I left early to get here earlier. I didn’t know dad was going to be on a date. I’m over tired and excited to be home.”

“Son, have you been storing up all of your talking? I don’t remember you ever saying this much.”

“Oh Dad, sit down. Let’s talk to your new friend.”

Sophie didn’t like the sound of that, yet it was better than having them leave and her house being empty and no one to share the Christmas lights with. At that moment she realized why she didn’t like to have lights at home. At work, she could share the holiday decorations with everyone who came in the shop. At home, it was only her and she didn’t want to decorate just for herself.

Having Darron and Branson here made her house more like a home. Not that ever thought she wanted to have a teenager around, but his dad was nice. And it was kind of a package deal.

She had found the father and son interaction in the car interesting and enlightening as they spoke about the military and Branson’s upbringing. She’d learned that Branson’s mother died in a jet skiing accident in Belize after she left them when he was not even one. It explained more about both of them.

She shook her head. They were talking to her. Oops.

“Where’s your tree?” Branson asked. “You’re supposed to have a tree, especially this close to Christmas.”

She shrugged. “Don’t have one. I sold all the ones at the shop.”

“I’ll cut you down a tree tomorrow,” Branson delclared.

“Whoo whoo!” Branson yelled, pumping his fist in the air.

Sophie let her gaze slide back over to Darron. He smiled at her and nodded. It was going to be a Merry Christmas after all.

Posted by Michelle Libby at 3:01 PM