Many Windham students serve as honorary page in recent months 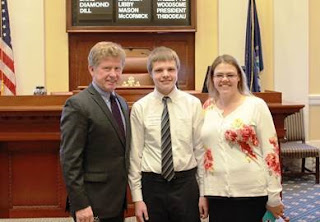 AUGUSTA – Casey Hafford, a student at Windham High School, recently served as an honorary page in the Maine Senate for the day as a guest of Sen. Bill Diamond.

Casey is pictured with his mother, Lillian Parsons, and Sen. Diamond in the Senate Chamber. 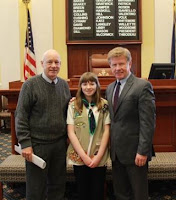 On Tuesday, February 16, Girl Scouts from around the state visited the State House as part of Girl Scout Day in the legislature. Throughout the day, Girl Scouts met with legislators, observed the senate and house sessions, and were recognized by a joint resolution.
Windham resident, Beth Anne Wright, participated in the event as an honorary page in the senate and met her state senator, Bill Diamond. 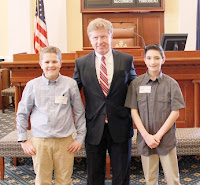 Beth Anne is pictured with Sen. Diamond and Dennis Ela, former principal of the Manchester Elementary School in Windham. 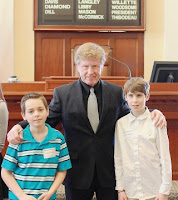 Windham Middle School students, Timmy Nichols and Stephen Leavitt, served as honorary pages in the Maine Senate on February 18 as guests of Sen. Bill Diamond of Windham. Both students were invited to the State House by Sen. Diamond for achieving student of the month at school. The honorary page program gives students an opportunity to participate in the process and interact with Legislators. Honorary pages have the opportunity to see what it is like to work on the floor of the senate and be part of a legislative session. Pages perform such duties as delivering messages to senators and distributing amendments and supplements in the chamber. Students from third grade through high school are invited to serve in the senate chamber as honorary pages when the senate is in session. For more information or to schedule a visit, call Sen. Diamond at (207) 287-1515.
Posted by Michelle Libby at 12:37 PM