Student of the week - Tedi Hassapelis

Tedi lives with Andrea Casparius, Verne Mapes and Rudi Hassapelis for the majority of the time. They have many pets like chickens, ducks, blue and yellow macaw, dogs, cats, a rabbit, lizard, horse and a donkey. 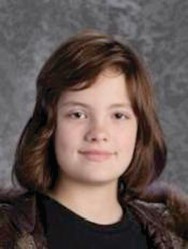 “Tedi is student of the week because of how hard Tedi works and how much Tedi cares about and helps others. Tedi takes schoolwork very seriously and is an especially talented writer!” said the teachers.

To Tedi, the most important things are “Making sure the people I care about are happy. It troubles me when they're not happy or if they're upset, if I can I want to help.”

Learning is fun because “I like pleasing my teachers and seeing good grades/testing out what I know and memorize,” Tedi said. Tedi likes science or social studies a little more than other subjects.
Tedi would like to be a voice actor or an artist/musician.

Favorite movie: I don't watch movies often, generally Anime and a few other series. My favorite movie is either Legend of Tarzan, Avatar or Mulan.

Favorite music group: I can't choose favorites but it would have to be either Kamijo, SiD, Versailles, Vixx or Jupiter.

Favorite holiday: Halloween. I'm not really into the whole candy thing, it's more the dressing up part.