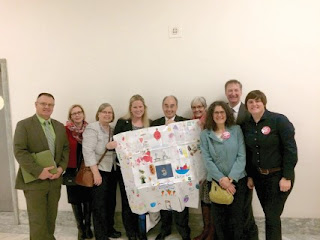 
This was the second year the team was invited by the PEW Charitable Trust to make the trip. Representing RSU14 were Director of School Nutrition Jeanne Reilly; Eliza Adams, a Windham Middle School health teacher; and School Nutrition Coordinator and chef Samantha Cowens-Gasbarro.

Last year, the trip was focused on letting people know that the guidelines could work and urging that they be upheld, said Cowens-Gasbarro. This year, the focus was on pushing for reauthorization of the act, which expired in September of 2015.

In January, the Senate Agriculture Committee released its reauthorization bill, titled The Improving Nutrition and Integrity and Access Act of 2016. “We liked what the Senate had proposed in their bill, and we just wanted it to move forward,” said Cowens-Gasbarro. Without reauthorization, big companies that supply products don’t want to put any money into anything until they know what the standards will be. That means the district struggles to get products in that meet the standards, said Cowens-Gasbarro.

Reauthorization of the CNA is important, said Reilly, both because of funding, and because not having authorized guidelines leaves too much to interpretation. “We feel strongly that the guidelines need to be kept where they are,” she said. “We can show that with care and diligent work these guidelines can work.” 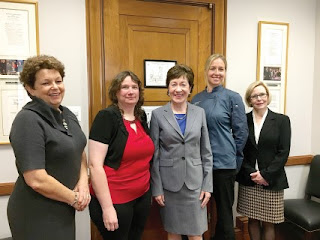 Cowens-Gasbarro agreed. “We need to keep enforcing these standards with these kids because it is working,” she said. The nutrition team works hard to put things on the menu that kids are familiar with through cooking club or taste testing, and the result is that children are excited about the salad bar and eating fresh fruits and vegetables, she said.

There are other indicators that the standards are working in RSU14. In her preparation notes, Adams wrote, “As a health teacher I have seen firsthand the contribution of improved nutrition upon student readiness to learn and school engagement.” When school lunch included unhealthy choices like chips, soda and ice cream, she said, learning and attention would deteriorate throughout the day. The lunch menu contradicted the lessons she taught in healthy nutrition.

The Child Nutrition Act of 2010 has been a big part of changing the culture of WMS, Adams added. “We know a healthy culture has made a difference, and nutrition is the cornerstone,” she wrote.

Reilly said the PEW Charitable Trust chose to invite districts that were both making the guidelines work for them, and those whose Senators and Representatives are influential on the appropriate committees.
“They invited us down because we’ve been successful in making the guidelines work and are seeing school meal participation go up,” said Reilly, who added that lunch participation is up about 15 percent over the past couple of years, and breakfast participation has increased 95 percent in the past five years. This is a big contrast to the struggles and declining participation other districts report since the CAN was enacted.

Studies are showing that there is an impact on childhood obesity, but even more important, Reilly says, is the ability to influence a future generation of eaters. “We’re influencing the culture of the next generation,” she said.

Talking to children in the elementary years helps them learn early on about trying new foods, making healthy choices and eating fresh and local. “We will really see the changes in 10 to 15 years with a group of adults who have a better handle on healthy eating,” she said. “It’s a culture shift and it takes a while but we think we’re making a really big impact.”
Posted by Michelle Libby at 2:00 AM