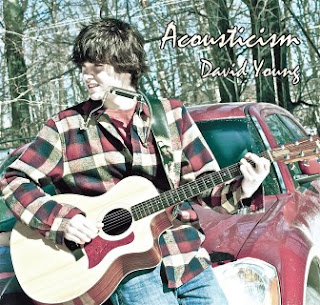 David Young is only a junior at Windham High School, but the songs he writes suggest an older soul than his age and surname do. Part of that vibe comes from the fact that David has been playing guitar since he was 10, and part of it comes from his influences, which include Neil Young, James Taylor and his grandfather.


“My grandfather’s the real musician in the family,” Young said. “He’s the one that got me into guitar.”
Like his grandfather, Young has developed a passion for folk and rock music. He has embraced the folk side on his upcoming album, “Acousticism,” which he will debut at a release show at Faith Lutheran Church on April 16th.

“It’s pretty introspective,” he said when describing his album. “It’s something people haven’t seen since the folk scene in the 60s and 70s. Singer-songwriters now are a lot different than they were then. I can’t really connect to a lot of music on the radio that’s popular with the kids now, so it’s more geared toward what music was like 50 years ago.”

Young said his lyrics weave his personal experiences in with references to historical events, philosophy and religion. He is excited to perform them live at his album release show.

Audiences are taking note, as Young’s rock group the Rubber Band recently qualified for the final round of the Maine Academy of Modern Music’s high school battle of the bands. The Rubber Band began this summer as a vehicle for Young to “mash out some jams,” with fellow Windham students Seth Martin, Cooper Gaudet and his brother, Deven.

Young will be joined at MAMM Slam by another band of WHS students, Psycho Brahe, featuring Avery Schrock, Olivia Mora and Caleb Schrock. “It’s friendly, but it’s competitive,” Young said of Psycho Brahe. When asked whether or not that competition motivated him to work harder, he replied without hesitation: “Certainly.”

True to his nature, Young is showing perspective beyond his 17 years by looking past the upcoming competition and focusing on long term success.

“I’m just trying to get bigger and bigger,” he said. “Slowly but surely, you know? Maybe some day down the road, people will say ‘this is some good stuff.’ That’s the hope and dream right there.”

David Young will perform an album release show at Faith Lutheran Church at 6 p.m. on Saturday, April 16th.  He will perform with the Rubber Band in the final round of the MAMM Slam on Saturday, May 14th at the Portland House of Music & Events.
Posted by Michelle Libby at 2:00 AM