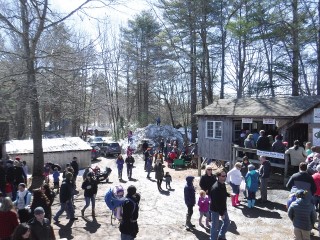 With unfavorable conditions for sap harvesting over the past two weeks, a cold snap and ideal weather prevailed this past weekend for Maine Maple Sunday. Anyone who has a passion for tradition and the taste buds for anything maple, showed up at Merrifield Farm in North Gorham. From the very start at 9 a.m. the cars began to line both sides of Gorham Road. At one point the line of vehicles stretched a good half mile.

Long lines formed and remained steady to get their fill of Maine’s state sweetener on a fun filled weekend.


Jokingly, Lyle Merrifield explained, “I am starting to get way too many eggs in one basket!”  Last year he had an estimated 7,000 visited the farm and expects more this year. “We count that [number of visitors] by how many schools visit as well as the amount of cups used for the ice cream.”

Vsitors enjoyed the process of making syrup and sampling the treat over ice cream. But that was just the beginning. Also offered was a full pancake breakfast, a chance to purchase many of the maple products and see demonstrations. A blacksmith toiled over a hot furnace, while close by another fire was ablaze, heating huge cast iron cauldrons filled with sap, as had been done in the early 1800’s. Ox cart rides were available for a relaxing escape from the heat and the crowds. 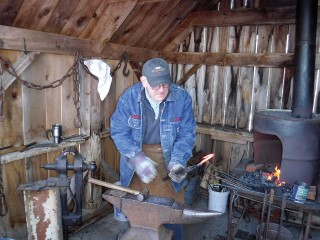 Providing the musical entertainment was the duo of Melissa Bragdon-Caron and her husband Kevin, otherwise known as Sugar Hill. Melissa, who now lives in New Hampshire but originally from Windham, taught fiddle playing at 317 Main, the Community Music Center located in Yarmouth. Both Carons have been a part of the Portland area music scene in the past. On this day maple lovers were treated to an array of instruments that include the mandolin, banjo, and acoustic guitar and of course, the fiddle.

The real draw, as always, was witnessing the process of making Maine’s official sweetener. The last two weeks have been too cold to make syrup. But that didn’t stop Merrifield’s efforts for a successful weekend. “We put together a lot of small ones (batches) and saved it for yesterday and today,” explained Merrifield.
Processing sap is a long process requiring many gallons of sap to produce just one gallons of syrup. “The ratio for making syrup is 40 gallons of sap to one gallon of syrup,” shared Merrifield. There are 750 to 900 trees that are tapped.

Grades of syrup, for the most part, are all determined as Grade A. There is a system of measuring with a standard grading kit. But according to Merrifield it wasn’t always that way. “It took almost 15 years to have all of the United States and Canadian Provinces to use the same grading system. We (Maine) haven’t had Grade B syrup in 35 years.” Not all visitors were from the area or Maine for that matter. Visiting Maine until Tuesday was Louisiana resident Arlene Byrd. “I’ve been to Maine before but further South,” shared Byrd. Wearing four layers of clothing she has never worn before did not prevent Byrd from having a fun time. Braving the long line to see the sap being processed she also shared laughingly, “This isn’t my first stop. I headed for the ice cream.”
It is doubtful that maple syrup purchased over the weekend will last long in any household, but it does keep. “I’ve seen syrup at the Cumberland County fair knocked off the shelf and the handle on the top broke, so the can started leaking. When we opened up the can and noticed the lithograph that dates the syrup, it indicated being as 50 years old. It was fine,” recalled Merrifield.