Windham Primary School’s (WPS) second through fifth grade students competed in the Odyssey of the Mind regional meet a week ago on March 25 in Auburn. Three of the four Division I students placed and will compete at the state level on Saturday, April 1 at the Biddeford High School in Biddeford. Two WPS Primary division teams also competed at the non-competitive portion of the tournament. 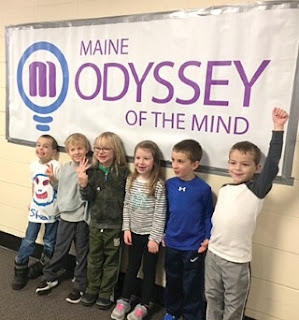 “Odyssey of the Mind (OM) is a creative problem-solving competition for students of all ages,” stated Linda Berry, Enrichment/Academic Support Coach for RSU14. “Teams of students select a problem, create a solution, and then present their solution in a competition against other teams in the same problem and division. Groups of students are placed on teams of up to seven students (with one or two coaches), typically meeting weekly throughout the OM season.”

Fulfilling the STEM (Science, Technology, Engineering, and Math), Common Core and 21st Century Skills Initiatives, OM fosters critical and creative thinking in - “An environment where there is no right or wrong, no grades, no standardized tests.” www.meodyssey.org.  Instead, students are introduced to creative problem solving in tangible ways.

“Odyssey of the Mind aligns directly with the current district Strategic Plan, specifically around innovative practices and creative problem solving,” Rhoads said. “Importantly, our students learn lifelong skills and have loads of fun!”

The team of students and coaches, who begin to meet in late/fall early winter, select which of the five long-term problems they wish to solve. “The specific problem changes every year, although there is always one in each of five categories that include: Vehicle, Technical/Performance, Classics, Structure and Theatrical,” Berry explained.

All coaches are volunteers and contribute to the success of the students and their participation in OM. “We truly need community support to operate successful teams,” Rhoads explained. “Teams are coached by volunteers and at times need to do some fundraising to buy supplies for their problem.”

All the hard work and fundraiser efforts have paid off as the three teams in Division I prepare for their competition this weekend.

“Good luck to our teams on Saturday,” Rhoads said, cheering on the team. “I know they will make us proud!

For more information about Odyssey of the Mind visit: www.meodyssey.org. To donate supplies or help to raise funds for the WPS teams contact Dr. Kyle Rhoads at: krhoads@windhamraymondschools.org