Raymond Village Library Plant Sale by Sheila Bourque, President of the Board

The plants and the volunteers are ready! This year's plant sale on Saturday, June 3 from 7 a.m. to 11 a.m. is going to be better than ever. The library has an abundance of plants that are waiting to find homes. The sale offers everyone a chance to get some great plants for the flower and vegetable gardens at reasonable prices. 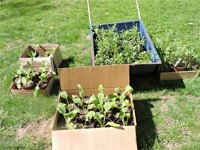 Volunteers have been working hard since last fall to make this sale a standout. Donations received last fall were wintered over in the Community Garden and area growers have donated plants. The selection includes more than 400 plants.

This annual fundraiser is important to the library and its’ ability to provide services to the community. Stop by and grab some wonderful plants while supporting the library.

Additional donations will be accepted Friday, June 2 from 2 p.m. to 5 p.m.


Posted by The Windham Eagle at 2:00 AM No comments:

Posted by The Windham Eagle at 2:00 AM No comments:


Barely six months after the release of her first children’s book, “The Boston Terrier Who Thought He Was a Loon”, Raymond author Michelle Patch, illustrator Thomas Block and design artist David Allen, have won the prestigious Excellence in Graphic Arts Award at the New England Book show – held earlier this month at Boston Symphony Hall. 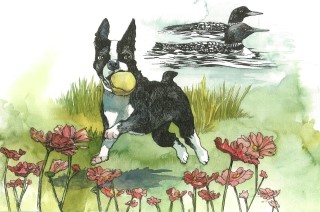 Jane Karker, president of Maine Authors Publishing (MAP) accepted the award for Patch, who could not attend the event. Karker proudly acknowledged that, in its 16 years, it was the first win at the Book Show for MAP.

The event, founded by Bookbuilders of Boston, is in its 60th year and was established as a nonprofit organization to exchange information and promote improvements in the quality of books. Finalists are selected for the quality of design and production.

According to the selection committee, Patch’s book was chosen “…for its charming and emotive illustrations that combine with a sweet family story of a summer on a beautiful lake in Maine.”

Said Patch upon learning of the award, “I’m really proud of the collaboration on my book. Thomas Block (MAP’s art director) and David Allen did an amazing job of really listening to what I envisioned – taking the pictures I had in my head and bringing them to the pages. Rollie (the Boston Terrier) is beautifully represented; I want readers to enjoy him as much as I did, and I think between the art work and the story, that really happens.”

As reviewed in The Windham Eagle (Feb. 24, 2017), “The Boston Terrier Who Thought He Was a Loon” tells the story of the Patch family dog who tries to befriend a group of illusive loons who live on Thomas Pond in Raymond, Maine. With its themes of friendship and sense-of-place, the book already has demonstrated appeal with young readers.

According to Worlds of Words (WOW/University of Arizona), a blog that promotes excellence in children’s book reviews, “Illustrators have license to participate in the authorship (because the pictures) affect the tone of the story.”

And just as music melds with the lyric, WOW defines good children’s literature as “…an exquisite weave of both words and images.

Just as important as text, is the close examination of illustrative style and whether it indicates a particular location of where the story takes place; and whether the style and details in the images are authentic to the culture depicted by the book.”

It appears The New England Book Show felt “The Boston Terrier Who Thought He Was a Loon” passed that test.

So where can the award-winning book be purchased? Patch says it’s popping up in lots of places, including the Good Life Market and Cricket’s Corner in Raymond and the Bridgton
Posted by The Windham Eagle at 2:00 AM No comments: