Changing the stigma of school lunches by Michelle Libby

"Try a free sample? Eat my lunch,” were both phrases heard last Wednesday at the Windham High School cafeteria, when Kim Bartholomew’s class took on the challenge of changing the minds of their classmates when it came to school hot lunch.

For years the jokes about hot lunch have been immortalized in movies, TV shows and in the halls of the typical high school. At RSU14, Chef Sam Cowens-Gasbarro leads a dynamic team of chefs who make 80 percent of the school lunches from scratch. She teamed up with the health class for this project after speaking with them for a nutrients unit on how to eat healthy.

“Sam was working on how to decrease the stigma of school lunch,” said junior Skylyn Vokey.

The 24 students in the health class determined their student-led project would be about the school lunch program. They were tasked with advocating for the program, creating a balanced lunch that the students picked, cooked and served. By increasing student involvement, the class was able to provide insight into how the lunch program works and create a meal to entice students to try the special, the lunch created every day by the chefs.

“I learned a lot about school lunch,” said Vokey. “Chef Sam calls it the biggest restaurant in town.”
The high school serves between 600 and 1,000 lunches each day including the special of the day, pizza, salads and wraps. Each special has to meet government regulations to include the proper nutrients for the students. “It’s a lot harder than it looks,” said Vokey.

The class sent out a survey to get student perspective on school lunch. The responses were primarily negative. “It’s slop on a plate.” “It’s gross.” “It’s all processed food.” The class knew they had a big job trying to change the way people thought about lunch.

One of the goals of the unit was advocacy, according to Bartholomew. The class created 30 second spotlights for Parker Quimby to read on the school announcements. They put a story in the school newspaper and sent messages on Twitter and Facebook. They made posters and will continue to analyze their success after the event.

The meal the class made and marketed on Wednesday was chicken and waffles. On the first Wednesday in June, they will serve chicken stir fry. The class came up with the menu and taste tested the product before giving it the go-ahead. Each student had a job toward the success of their campaign. They decided to do a sample table near the entrance to the cafeteria so students could “try before they buy.”

“You don’t realize how much effort goes into (the school lunches),” said Vokey. The student chefs and employees planned to serve 200 specials on Wednesday, but halfway through the second of three lunch periods, they realized they would need more to meet the demand for the day and scrambled to find more of what they needed.

Many of the students had never eaten chicken and waffles, as it’s more of a southern dish, but after having a sample, they got in line. 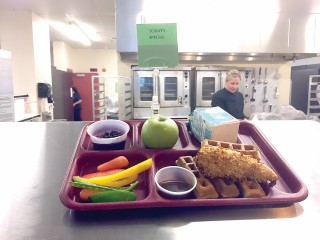 “It’s neat to see how we can influence lunch,” said Darren Emerson, who is part of the project. “The sample gets them.”

Teachers, students and support staff all stopped by for their tray of chicken and waffles.
“I wanted to try it because I heard a bunch of people freaking out about it. I loved the little berries,” said junior Victoria Thompson.

Chef Sam expected to have 200 specials purchased, but they were on track to serve 350. The secret was getting the students involved in the process, she said. She aims for transparency in the program so the students know what they are being served. “We want to make it a high end restaurant, their bodies deserve it. It’s exciting to see this,” said Chef Sam.

Since the advocacy started at the end of March, 50 more students each day are ordering the special. The only thing that had changed in that time is the increase in information being disseminated. The more lunches being bought has a direct impact on the revenue and the ability to purchase more local produce, said Chef Sam.

Senior Emily Kent served the meal. “It was different than I expected. Everyone was surprised I was serving. It was scary at first. I get school lunch all the time and the line was never that long,” she said.
More student advocacy is underway. Last Thursday, Chef Sam and 22 students from the high school met with Share Our Strength, a national project, to discuss breakfast and how to help more students have access to a good first meal of the day.

For more on school lunches, visit www.rsu14.org under the departments tab.
Posted by The Windham Eagle at 5:24 AM