Tuesday, June 20 at the Raymond Village Library, Anne Gass presented a talk on “Patriotism, War and Woman Suffrage,” which focused on the year of 1917 when the National Woman's Party began picketing the White House, the United Stated entered W.W. I and the State of Maine had its first woman suffrage referendum.

Gass is the author of “Voting Down the Rose: Florence Brooks Whitehouse and Maine’s Fight for Woman Suffrage,” an account of Gass’ great grandmother who was a suffrage leader from 1914 - 1920.  Whitehouse, well-known in Portland’s society circles during the late 1800s and early 1900s, actively worked and picketed with well-known and controversial women activists of the time, including Alice Paul.

Gass began her presentation by introducing Whitehouse and the suffrage movement in Maine and nationally. Gass emphasized that although much has changed since 1917, there are many issues that society still tackles that are eerily similar in today’s political environment.

“The country's involvement in W.W.I diverted scarce money and volunteer resources away from suffrage, and caused a surge in patriotism that helped suppress civil rights. Fierce anti-German sentiment has some echoes in what we're seeing now, in 2017,” said Gass.

She noted that at President Wilson’s urging, in June 1917 Congress passed the Espionage Act, later amending it with the Sedition Act, which gave the Wilson administration an unparalleled ability to shut down free speech and suppress any opposition.”
Patriotism and propaganda were rampant. The patriotic fever experienced by many as a result of the 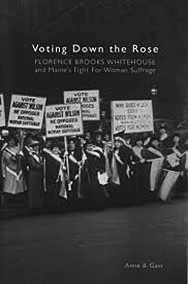 war, created a feeling of disgust toward any form of protest or picketing. Activities such as these were viewed not only as unpatriotic but treasonous as well. Alice Paul and the Congressional Union began picketing President Wilson in January 1917, but after the US entered the war, the picketers were arrested, fined, jailed and attacked by mobs, in clear violation of their free speech rights.

As chair of the specially created Equal Suffrage Referendum League of Maine, Whitehouse organized lectures and debates, brought in suffrage organizers from out-of-state and in June 1917 took over an edition of Portland’s Daily Eastern Argus. The League and its supporters provided articles related to suffrage and did the layout and sold ads, but they could keep all of the revenue they earned from sales. Despite these efforts, Maine’s suffrage referendum failed by a two to one margin.

Women faced many difficult challenges in their efforts to win equality during the early 1900s, and the efforts of Whitehouse and others were a step forward in civil rights.

Posted by The Windham Eagle at 6:08 AM