It was Friday afternoon June 30 and the beginning of the July 4th weekend. Our crews had just signed out and left for the week when the first call came in. A lightning strike at a residence in Point Sebago had left a large pine tree in splinters and lying on top of an automobile. Aaron, one of our three job estimators/crew supervisors, immediately called in three of our crew leaders (Tommy, Darren & Nicholas) to remedy the situation. At that point, we had no idea of the scope of things to come. 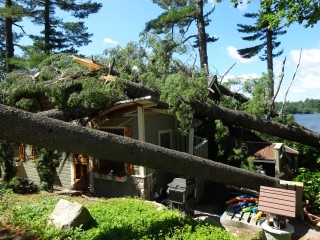 First thing Saturday morning my cell phone rang. It was our Emergency Line. Wind from the previous night’s thunder storm had blown a tree down on a house on Little Sebago Lake in Windham. I drove to the scene and found that a very large pine tree had fallen across the front deck of a home, tearing the deck from the house, but miraculously doing very little damage to the house itself. After assessing the situation, the property owner and I decided the tree could wait until Monday morning to be removed. As I left the scene, I observed multiple properties with trees down and strewn about and knew we would be getting more calls soon.  Sure enough, all that day non-emergency calls came in to our office voicemail, asking to be “put on the list” for storm-damage cleanup the following week.

It wasn’t until later that afternoon that reports started coming in of severe winds and possible tornados in Bridgton, Denmark and Harrison. When Adam, who manages the Bridgton Region, started getting calls from his customers that afternoon, he knew we were in for a busy week. He immediately contacted our team and put them on notice that we would likely be working the next morning.

By 8 a.m. most of our crew had turned out and were converging on the storm zone. Our plan of attack was to: remove the trees that had fallen, or threatened to fall, on houses and automobiles first and focus on the cleanup later. We split our team up into four crews. Two crews went to Highland Road in Bridgton, one crew went to Highland Pines across the lake and another crew went to Moose pond.
It didn’t take long for word to get out about the storm damage. Highland Road soon became a steady parade of curiosity seekers which hampered our effort for a safe tree removal. The buzz of chainsaws filled the air and neighbors were all out, milling about and talking - no doubt trading stories about the previous night’s events. Miraculously, the only injury we heard about was 3 stitches to a girl’s face from flying glass. 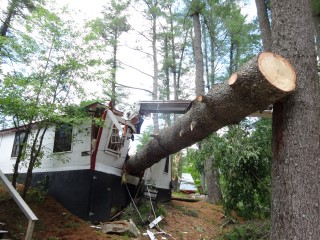 By 8 p.m., we had only made a slight dent in the most severe locations, so we sent our crews home to rest up for a busy week. Calls continued to come in as the week progressed. Many of our team sacrificed their 4th of July holiday to keep up the effort. Some even continued to work through the following Saturday. I personally would like to publicly thank our many team members for their dedication and hard work, and their family members for their understanding during a holiday week.

During this time, we’ve seen many tree defects, some of which were previously undetected, exploited by the wind. In some cases, even perfectly strong and healthy trees have been twisted and broken.

When it comes to tornados, no tree is safe.

“Why did that healthy hemlock tree split in two while that dying pine stood 30 feet away undamaged?” one of my clients had asked. The reason for this is wind resistance. The hemlock had much more surface area for the wind to push against.

Observing the effects that severe weather has on trees gives us arborists experience and foresight and makes us better able to identify “problem trees” in the future. After years in the business, and a few storms under our belts, we are much better at predicting future failure than we used to be.

What can you do to prepare your trees for the next big storm? Basically, pay attention to your trees. Rotten trees and trees with multiple tops are usually the first to go. If you have questions or concerns, contact a professional arborist to help you assess the situation. Most arborists offer free advice and the benefit of years of experience and better yet, a recent week’s worth of experience. Like 4th of July week, 2017.

The author is General Manager of Q-Team Tree Service in Naples and is also a licensed Arborist. He can be reached at RobertFogg@Q-Team.com or 207-693-3831.

Posted by The Windham Eagle at 6:05 AM