"Attorney Paul Ramsey was having a bad run, capped off by one of the worst days of his professional life.” – “Beneath the Depths”

Five and a half years ago, Bruce Robert Coffin was preparing to retire from the Portland Police Department, where he worked as a detective sergeant. Already an award-winning painter, he wanted to write books about what police work was really like.

With the release of his second book, “Beneath the Depths,” Bruce Robert Coffin repeated the success he saw with his first book “Among the Shadows”. The second book sold out the print books on Amazon within the first 48 hours. Coffin’s speaking engagements are filled with readers anxious to ask questions and purchase signed copies of his books. New readers are picking up the books and diving into his world.

“It’s awesome to meet a room full of people who are as excited about the characters as I am. They’re the reason I come home to write,” Coffin said. “It matters to me, because it matters to them.”

His goal for his first three books, which all will be published by Witness/Impulse an imprint of HarperCollins, is to build an audience. Since the first book was released in September, he has made 90 appearances at libraries, conferences and book signings. “I love this. Are you kidding me?” He is

entertaining, engaging and has stories that keep readers on the edge of their seats.

The series “A Detective Byron Mystery” contains the stories of Detective John Byron and the Portland Police Department. “I’m addicted to my own characters,” said Coffin. “There are so many things going on with their lives.” Coffin has planned more books in the series after the first three, but each book stands on its own. “I have more stories to tell and John has more stuff to do,” he added. He acknowledged that he doesn’t have a lot of free time to paint or to write other books. When he has ideas he jots them down, but said he doesn’t have time to do anything with them. “I spend so much time with these characters,” he added.

In “Among the Shadows”, Coffin wanted to give readers a great mystery story, but also wanted to introduce John Byron to them. “It allowed me to introduce him to the world.” In the new book, John Byron’s struggles continue when Paul Ramsey, a very prominent and despicable lawyer is murdered. “No matter how horrible your victim is, they still deserve justice. There’s still someone worse,” Coffin said. 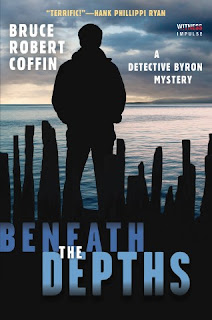 “Beneath the Depths” shows Portland as a seaport featuring the waterfront. While doing his research for the book, he met a 21-year-old deckhand named Evan. Coffin told him that he’d put Evan in the book and he did. Evan was excited and told everyone he was going to be famous, Coffin said. When Coffin went back to show Evan the book, he found that Evan had passed away from cancer. Evan hadn’t let cancer beat him down, preferring a positive outlook on everything.

“I’m glad I used his name. I’m going to keep him alive. It was like it was supposed to happen,” said Coffin.

As an author, Coffin has learned how to budget his time to keep his head in the story. “The book is not going to write itself,” he said. He trusts his instincts, and he doesn’t want to become predictable. “I’m one of those drivers who never uses his blinker,” Coffin said.  He has a strong support system.

Author Kate Flora was the first person to help him get published. Since being published, Gayle Lynds has done a nice job of leading him in the right direction career-wise.

“Every day there’s something really awesome,” said Coffin. His first book will have a large print edition. “Among the Shadows” ebook will be on sale during the month of September for $.99. “I’m enjoying this better the second time around. I was looking forward to it,” Coffin said.

The third book is scheduled for a June 2018 release. “For those who got my book and read it in one day, it’s an eternity,” he said with a laugh.

His book launch for “Beneath the Depths” will be on Wednesday, September 13 from 4 p.m. to 9 p.m. at Mast Landing Brewery in Westbrook. Mast Landing and Longfellow Books, who will be selling books at the event, will both donate 10 percent of the profits to My Place Teen Center.

For more information and where to find Coffin’s books, visit www.BruceRobertCoffin.com.