Niagara Falls is labeled one of the top natural wonders of the world. For that reason, I have dreamed about going there for years. It’s one of the top 1,000 places to see before you die and the documentaries and stories I’ve seen made me want to explore the area. 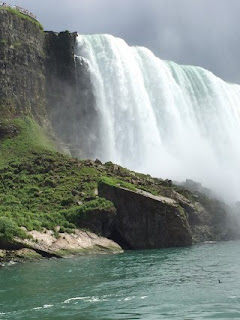 The opportunity to visit came last week as we scheduled college tours for my son. A few colleges in Massachusetts and then off to Rochester to see RIT. With Niagara only 60 miles beyond RIT there was no way I was letting the opportunity pass to visit the famous falls.

We stayed in Buffalo about 15 minutes from the epicenter of the commotion. The whole experience was different than I expected.

Niagara Falls generates power for much of New York, and some of New England, as it runs through huge hydro-power generators in the shadow of the falls. The amount of water that goes over the falls is astronomical. The topography of the underwater areas around the falls is carved into the limestone and bedrock to depths of 215 feet at some points. Even the class six rapids before The Whirlpool have a depth of 125 feet with waves shooting into the air up to 30 feet at times. Because of the power it generates, power lines crisscross Buffalo and spider web out from there to bring electricity to 100s of thousands of people. I found this shockingly industrial for one of the nation’s natural wonders.

The falls are huge, but they are dwarfed by the casinos and hotels in the area. I was surprised by the Made in the USA stores and the hotels vying to have the best views of the falls. We took a wrong turn trying to find our way to the Maid of the Mist, which we were told not to miss, and wound up on The Rainbow Bridge on our way to Canada. I wish I hadn’t been driving at the time because the few glances I had of the falls from the driver’s seat were amazing.

Knowing that we were going to need our passports to go to Canada, we were prepared and passed through Canadian customs without issue. My guess is that a lot of people go to Canada for the day in that area.

For those who have never been to Niagara Falls, there are two sets of falls. The American Falls, which are smaller and have eroded faster, causing the bottom of the falls to be filled with rocks that the water cascades around. It also includes the Bridal Veil, which is a lovely straight waterfall that is between the larger falls and Goat Island, which is accessible, but I’m not sure how.

The other part of the falls is the Canadian Falls or the Horseshoe Falls, which is so named because of its shape. It is the more dramatic falls and from the Canadian side, is breathtaking to behold. 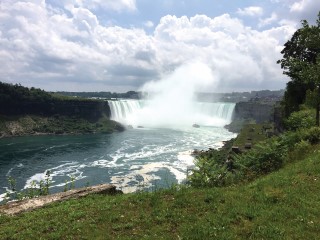 Parking is expensive regardless of which side you are on. We were lucky and found a parking spot where we had lunch. We were then able to continue parking there for the rest of the day. Granted, we had six blocks to walk down to the falls and then more to get where we were going, but for free parking, we sucked it up. We passed places that were $40 for self-parking or $50 for valet parking.

They were making some great money that day.

The sidewalks and walkway near the falls and river were very busy. Some people were strolling along, but most were hustling to their next destination. We were one of the hustlers. I stopped, took a photo and then moved on. I did that a lot since it was very hot and humid.

My favorite part of the trip was what we were told not to miss. At some point Maid of the Mist sold the Canadian part of the business to Hornblower Niagara Cruises. This was what we chose to do. We bought our tickets online to save a little money and time at the ticket booth. The Hornblowers have the process down tight, herding hundreds of people onto boats that were on a rotating schedule. One pulled out full and the next one pulled in to disembark the passengers and pick up new ones in time for the first one to return.

We were given red rain ponchos to wear because we would get wet. We leaned on the railing and I was looking forward to the soaking, so my son and I agreed not to wear ours. My husband wore his poncho. The tour took us to the base of the American Falls, past Goat Island and then into the swirling water at the base of the Canadian Falls.

I did what I usually do and took pictures until my camera decided that it was too wet to continue. With water dripping off my hair and soaking my shirt, I asked for my husband’s phone to continue taking pictures. The whole cruise took 20 minutes, but it was thrilling. The power of the falls and the beauty as it cascaded toward us was magnificent. It truly is the best way to experience the falls.

The trip was worth the time and effort. I wish I could have sat near the edge of the Canadian Falls, right where the water goes over the cliff, to observe. I felt like we’d rushed through everything and we should have reserved more time to take it all in.

My advice, if you should take the long drive to the western corner of New York State, is to experience the Maid of the Mist or Hornblower tour. (They’re virtually the same.) And then spend some time sitting on the grass or leaning on the railing watching the flow of water over the falls. It’s an unbelievable sight. The commercialism of the area surprised me, but in the end, the beauty of the falls won me over as I’m sure it does for all of those who visit.

Next week Part 2: What we do to our environment – the secret of The Love Canal.