Engaging your children during school vacation by Jennifer Davis


School vacation season is almost here and my family, like many families, is so excited to welcome in the holidays and spend some extra time together. Although we will be doing our fair share of relaxing, I do not want us to fall into the boredom rut - where we all get bored, so we just sit in front of the television for hours and binge watch a new show, or get sucked into the newest video game.

Two of my boys are ages six and my youngest son is 10 months old.  My 10-month-old is not quite into screen time, but my older two love it. I am the one who purchased these things for my kids, but I feel as though I am constantly saying no to them when they ask, “Hey mom can we watch T.V. while we eat breakfast?” or “Hey mom, can I play on your phone?”

This leads to bummed out kids and a guilty feeling mom. If your family is anything like mine, there is a way to keep our little ones engaged in activities that will bring your family together and cut out the screen time. 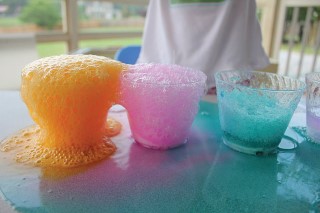 I have found that less can sometimes be more. Try for one thing per day where you have a planned activity. The activity can be as simple as playing a board game or as intricate as reading a story and doing activities that correlate to the story. Both things provide an opportunity to keep your kids’ brains firing. Having only one planned activity leaves room for imagination. You will be very surprised what will come out of four pieces of wood and some army figurines.

I have found that when learning comes from play, the lessons stick. At our house, we love to do science experiments with water, baking soda, food coloring and vinegar. My kids get to mix any of the things together and find out the cause and effect while getting messy. Do this while you are cooking dinner and the conversations and excitement will overflow.

I am constantly reminding myself to be open to things that are unplanned and to just listen. My kids have great ideas to share and something great always comes from them, if I am willing to listen and not rush.

A perfect example of this I have experienced with my four-year-old son. I was working on preschool material with him and he was getting visibly bored.  He found a tape measure on the table and asked if he could go “measure.”  Instead of saying no, I said sure and gave him a pad of paper and a pencil. He went around our house for 20 minutes measuring everything and writing down the measurements. It was a great unplanned, unexpected math activity that we talked and laughed about all day. Plus, he got practice on how to safely use a tape measure.

A good book with a blanket and pillow is always a good option, too. Cuddle up as a family and take turns reading or just sit together reading solo.

Lorna Harriman, first grade teacher at Windham Primary School recommends the following holiday reads: “The Family Under the Bridge”, “The Best Christmas Pageant Ever”, “Mooseltoe”, “Brave Irene”, “Snowmen at Night”, “How the Grinch Stole Christmas”, or “The Snowy Day.” The Windham Public Library would be a great place to visit for a new book to read.


If your kids learn better from sitting down to a worksheet, Harriman recommends the following websites, Education.com, kidzone.com, Scholastic.com, and k5learning.com, all of which offer free printable worksheets. I use Education.com regularly and really enjoy this website. Without a subscription, you can download and print up to seven worksheets per month.

Whatever you decide to do, enjoy your time together. Keep a journal so you and your family can remember all of the fun you had during your school vacations.

Time passes too quickly to let ourselves get sucked into too much screen time when the more valuable and important things are found in the people that surround us.  Happy Holidays.

Posted by The Windham Eagle at 9:13 AM No comments:

On Sunday, December 10, a convoy of 31 Gold Star Families and an estimated 175 volunteers traveling in 13 Chevrolet Suburban’s, two buses, two vans, 10 tractor trailers, Allen Lund’s Gigantic HD pick-up truck and an escort of eight law enforcement vehicles, will all arrive at the Windham Circle; where units from Windham Police and Fire Departments will meet and escort the convoy to Windham High School arriving at approximately 6:30 p.m. to 7 p.m.

The vehicles will park and everyone will gather at the high school’s covered entrance by the flag which is where the outside ceremony will begin. Wally Clark, Field-Allen Post 148 Americanism/Youth Officer will be the Outdoor Master of Ceremonies.

The Windham Police Honor Guard, along with the Field-Allen Honor Guard, will present colors and assist with the placement of the State House Wreath at the Veteran Memorial. The Field-Allen Unit 148 Ladies Auxiliary and A Co. 1st BN 3rd ACTB, Joint Military Cadets of America led by Dan Wirtz, will also assist in the event.

The outside ceremony will include, but not be limited to, the National Anthem played by the high school band, State Wreath posted by legion members and music provided by the Maine Public Safety Pipe and Drum Corp. Taps will also be performed.

Poland Spring will provide complimentary hot chocolate during the outside ceremonies.
The inside ceremony will be held in the auditorium with Windham High School Principal, Chris Howell acting as the Indoor Master of Ceremonies. The Windham Police Department will act as Honor Guard with the American Legion Honor Guard assisting.

Other events to follow will include an introduction of the Gold Star Families and local World War II Veterans will be honored. A description of the Summit Project Memorial Stones Program will be provided by Cindy DeCosta of Rolling Thunder, and there will be music performed by local music legend Rick Charette who will sing, “I’m an American, yes I am" which is this year's convoy theme.

Please join us in the Wreath Across the American festivities. A special surprise is scheduled for everyone’s listening pleasure!

Posted by The Windham Eagle at 8:51 AM No comments:


The kindergarten through first grade students at Windham Christian Academy hosted and honored approximately 20 local veterans with their third Annual Veterans’ Breakfast on Friday, November 10 from 8:30 a.m. to 9:30 a.m.
This yearly event is the brainchild of first and second grade teacher, Lynn Dodd.

“I feel it is important for the next generation to know the sacrifices that were made in order to have the freedoms we have today,” explained Dodd, and that this was the purpose behind this annual event. “Also, my husband is a Vietnam Vet and I know how important it is to show appreciation to all our veterans.”

The morning began with a Pledge of Allegiance to the U.S. Flag as well as to The Christian Flag pledge and the singing of The National Anthem.

Breakfast immediately followed and was supplied by parents. Food items included: scrambled eggs, bacon, ham, donuts, pancakes, crepes, orange juice and coffee. Students sat by their guest veterans who they had previously interviewed for an assignment.

Prior to the appreciation breakfast, the class got to know their individual veteran. “As a class, we sent out an interview sheet to the veterans that each student wanted to get to know,” explained Dodd. “The students learned, through the interview process, important information such as what branch of service their veteran belonged to, what they liked best and least about being in the service as well as what type of job they had.”

Although there were many learning outcomes to this event and class assignment, the most surprising factor the students learned was that not all individuals who join the armed forces fight on the front lines. “The students were surprised to discover that most veterans have jobs such as cooks, tailors and carpenters and that they don’t necessary shoot guns,” explained Dodd.

Other important knowledge gained by the students was that of social etiquette and event planning. Dodd explained that all the students participated in the planning and decorating for this annual Veterans’ Breakfast Event. Once their guest veteran arrived, they met them at the door, sat at the table with them and spoke with them as one would expect of any host.

Each veteran had the opportunity to introduce themselves and the roles they carried out while in the Armed Forces. Second grader, Caleb Johnson’s grandfather, Walter Johnson, was one of those veterans. “I served during the Korean War from 1953-1955,” Johnson explained. “I was stationed in Manheim, Germany and worked in the administrative and technology portion of the library.”

Upon conclusion of breakfast and prior to each veteran introducing themselves and their roles in the armed forces, the students performed the song, “I'm in the Lord's Army” and read a poem written by the students collaboratively. “From this poem, they learned that the word integrity means doing the right thing even when no one else is looking,” explained Dodd. “That is what our military has to do.”

When Dodd asked her students what they learned from this year’s event, she received many thought-provoking answers. “Some veterans were together in the same room and got to meet each other for the first time,” explained second-grader, Liam Kindred. “Some discovered that they were both in the same war and because of that, they got to meet new friends.”

One student noticed how happy the veterans seemed at being honored and given an opportunity to talk about their experiences. “I noticed that all the veterans were smiling,” second-grader Avery Sands observed.

The students, however, were not the only ones who had insight regarding the annual Breakfast Event. Former Windham Christian Academy student, Ben Manning, who is was recently discharged from the Navy shared a thought when it was his turn to introduce himself.

“I would like to take a moment to thank all the Korean and Vietnam Veterans who served before me,” Manning began. “When you came home from the wars, your reception by the public was not a positive one but you changed that for the younger generations. As a result, whether or not people agree with the war now, they still show their support to us troops. Thank you for doing that.”

With that, the annual breakfast concluded with plans to host a fourth annual Veterans’ Breakfast next year.

Posted by The Windham Eagle at 8:41 AM No comments:

Student of the Week: Sadie Vancelette


Sadie Vancelette, age 12 and a student at Windham Middle School is The Windham Eagle’s Student of the Week. The seventh grader enjoys field hockey, robotics club, Be The Influence club and sports. 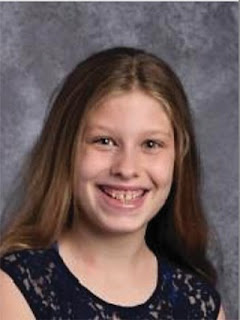 “Sadie has been selected for Student of the Week for her motivation to open the school store last year,” stated her teacher. “Sadie had an idea to re-open the store after [it] being dormant for a few years. Sadie has managed every aspect of the store from advertising, to budget, to interviewing and hiring volunteers, to staff the store. I have seen few students with her drive and passion in my 15 years in education. Sadie represents all of our core values of respect, responsibility, integrity, and compassion.”

Vancelette states that her parents play an important role in her education because they have always motivated her to be the best she can be. Hands on learning such as her STEM and clay sculpture classes are her favorite ways to learn and she plans to attend MIT when she goes to college.

Vancelette lives at home with her dad, mom, little sister and dog, Sisko.

Favorite subject: Science
Favorite movie: “Star Wars”
Favorite music group: I like all music.
Favorite holiday: Christmas or my birthday
Posted by The Windham Eagle at 8:36 AM No comments: