If you want a mystery that reads more like a family drama than a thriller, Janelle Brown’s “Watch Me Disappear” is the book for you. I couldn’t put it down.

The novel opens nearly a year after beautiful, willful, enigmatic Billie Flanagan goes for a hike and never comes home. Her husband, Jonathan, and teenage daughter, Olive, have started to come to terms with her presumed death - Jonathan is even writing a memoir about their love. 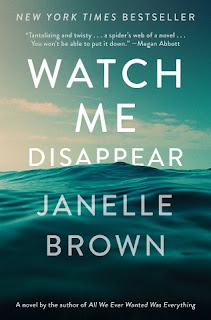 But then, Jonathan uncovers troubling inconsistencies about the Billie he thought he knew - a locked laptop file, receipts he can’t account for, a friend who says Billie wasn’t what she appeared to be.

When Olive starts to have visions of her mother alive, she believes they’re signs that her mother has been hurt or kidnapped and that she and her father have to look for her. Johnathan thinks Olive’s condition could be a form of seizure and is reluctant to delay Billie’s life insurance policy any longer.

Jonathan eventually agrees to join Olive in the search for Billie. Meanwhile, the drama of Jonathan’s and Olive’s life unfolds in real and unexpected ways. Their relationship feels painfully honest and heartbreaking at times, tender and sincere at others. Brown renders these characters so fully that I felt their every bump, bruise, and misstep. They are a father and daughter trying to figure out a Billie-less life and each other.

The novel ends with a bit of a twist, and while I didn’t find it completely surprising, it was satisfying.
While “Watch Me Disappear” centers around Billie’s disappearance, the most chilling revelation is that you might never really know a person, even the one you love most in the world.
Posted by The Windham Eagle at 12:25 PM