Book Review of “You Will Know Me” Reviewed by Jennifer Dupree, Circulation Supervisor at the Windham Public Library 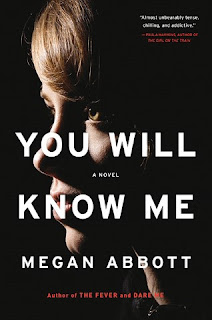 I’ve been on a roll with mysteries lately, but I loved “You Will Know Me” by Megan Abbott. This novel is part psychological thriller, part mystery, part family drama - all riveting.


Fifteen-year-old Devon Knox is an elite gymnast, and her parents, Katie and Eric, are devoted to her
success. But when Devon is just weeks away from competing in Olympic trials, a young man named Ryan dies. How far will the Knox family go to protect Devon?

The story moves back and forth through time and unfolds in waves: Devon sees her mother flirting with Ryan at a party; Devon, as a toddler, severs a toe on a lawn mower left running by her father. Younger brother Drew says he’s seen Devon driving, even though Katie insists that can’t be true; after his death, Ryan’s girlfriend calls Devon a “monster.”

Abbott thrusts us into the world of gymnastics - the amazingness of bodies, the potential of the human spirit to triumph, the beauty of winning. She also uncovers the darker side - the nastiness of girls, the biting competitiveness, the body-punishing in the name of achievement, the smallness of the world of elite gymnasts. Moreover, the willingness to succeed at any cost.

The novel unfolds quickly, intimately. While I wasn’t completely surprised by the ending, I was captivated by the psychology of what happened. It’s a novel that will leave you wondering if you would make the same choices Devon’s parents made.