A Matter of Historical Record: This rock must never be moved by Walter Lunt


Three men, burdened with a heavy load of food, tents, tools and equipment trudged through the wilderness territory just north of Sacarapy Falls, Falmouth (Portland, later Westbrook) in the chill and rain of April, 1735.


The difficult and uncomfortable journey was led by Rowland Houghton, a surveyor who had been charged by Massachusetts Governor, Jonathan Belcher to map out a new township along the Presumpscot River near Great Sebago Pond. Although white settlers would not arrive for at least another two years, it was essentially, the birth month of a plantation village to be named New Marblehead, later Windham.

The movers and shakers of colonial New England, prompted by the English Crown, were always quick to scratch their expansionistic itch. The Maine coast was already dotted with early townships and marine interests were anxious to diversify and expand world wide trade. To achieve this goal, progress would spread inward where the lakes, ponds and rivers would provide the thoroughfares to new inland resources like lumber, manufactured goods, farm products, apples and more.

Accordingly, when certain businessmen in the coastal Massachusetts town of Marblehead complained that their prosperous and growing town was “straightened in (their) accommodation” and restrained from further development by the community’s location on a peninsula, they approached Gov. Belcher and the Great & General Court to open new lands for their further settlement. The government’s response was swift, appointing a committee to create a 200-plus acre tract near the port of Falmouth in the province of Maine (at that time still part of Massachusetts).

Historians have noted at least two possible reasons for the governor’s quick attention to the matter: Expansion into remote regions allowed the governor to curry favor with the London colonial administrators, who had influence in the selection of political appointees in the colonies.

Or the proposed location of the new settlement, north of Falmouth and its busy port, could act as a defensive buffer against the Natives (or savages, as they were referred to by the settlers), who were now growing restless with the growing number of white settlements.

Legislation moved quickly and according to the historical record, read & voted: “That there be…a tract of land…six miles square…to admit 60 inhabitants belonging to the town of Marblehead…that are most likely to settle.”

In fact, less than five months had elapsed from the time of the Marblehead petition to Houghton’s journey into a deep forest, inhabited only by wild beasts and an occasional band of Natives. By order of the Court, Houghton and his two “chainmen” were to lay out 63 lots, the additional three lots to be reserved for (1) a settled minister, (2) a meeting house (church) and (3) a school.

Further restrictions called for, within a five-year period, the grantees to have built a home (at least 18 feet square with 7-foot studs) and have cleared at least seven acres for agriculture and farm animals.

The 63 lots extended from the (present day) cornerstone Lot #1 marker on River Road (opposite the Maine Correctional Center) south to the Westbrook line. Each home lot, intentionally narrow, measured a half-mile in length from the road (River Road) back to the Presumpscot River and just 10 rods (160 feet) wide. Known as “Indian” or “ribbon” lots, it was believed these compact lots provided better protection from attacks by Indians. The late Windham historian Kay Soldier once quipped that the layout was, “…literally, the town’s first sub-division.”

In addition to the 63 home lots, Houghton and his small crew laid out boundaries to the entire township of New Marblehead “…on the back of the town of Falmouth…six miles square, exclusive of pond & water.”

Evidence of their work survives today. All the home lots were measured from a point marked by a large pine tree on a corner of Lot #1. Houghton marked the tree E.B.1. The tree stood until the early 1800s when it was destroyed by lightening. Town officials later marked the spot with a granite stone that remains to this day. All subsequent land grants and private property parcels were laid out using the stone as a starting point, a fact that prompted one Windham historian to proclaim “This rock must never be moved.” 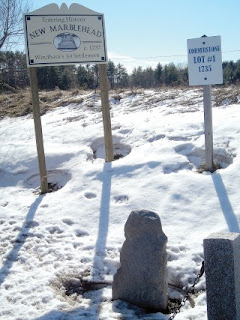 The Cornerstone Site is considered a historic Windham landmark but fell into disrepair over the decades of the 20th century.

In 2008, Boy Scout David LeClaire made restoration of the site for his Eagle Scout project. LeClaire cleared the area around the stone and added landscaping, crushed stone and ornamental bushes. Two granite posts linked by a chain were mounted on each side of the stone, reported LeClaire in his final project paper, “as a symbol that this monument needs to be remembered.” He also installed signs that name the site, the year and its significance.

The Windham Historical Society also installed a sign near the site that designates a portion of River Road a historic area.

In our next installment of the Historical Record, we’ll investigate early survey methods and explain why Houghton’s team was called “chainmen.”

Posted by The Windham Eagle at 9:07 AM