Music with a Mission features Windham Chamber Singers in concert 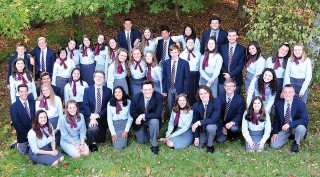 The Windham Chamber Singers will showcase their Spring Tour Program on Saturday, April 7, at 7 p.m. at the North Windham Union Church. Performing under Dr. Richard Nickerson’s leadership, this group has been the pride of Windham and Raymond and is now celebrating their 30th anniversary this year!


The Windham Chamber Singers is an auditioned choir made up of 40 mixed voices from Windham
High School. The choir gained international attention in 1996 by winning the Prize of Vienna at the 25th International Youth and Music Festival in Vienna, Austria.

Their accomplishments have been recognized on the “NBC Nightly News” and National Public Radio; they have also appeared on “CBS This Morning” as well as “The Today Show”. They have performed for two Presidents, including a command performance at the White House for the Congressional Ball.

The choir is getting ready to hit the road on their annual tour, where they share their music at other schools, nursing homes, and a variety of community concerts. The tour this year includes five days performing in schools and churches in New Hampshire, Vermont and Quebec, including a concert at the Notre Dame Basilica in Montreal. “Our choir is very excited to return as part of the Music with a Mission series this year,” said Dr. Nickerson.  “The singers have worked hard to prepare for our upcoming tour and this is a wonderful opportunity to perform this program for our friends and families while giving back to the community.” The community proceeds from this concert will help Windham-Raymond Backpack Program in their efforts to provide food to 150 students in 3 elementary schools each weekend of the school year, giving balanced meals for the food insecure.

The Music with a Mission Concert Series is sponsored by the North Windham Union Church, which donates a portion of the proceeds to area non-profits. Now in its sixth season, MWAM has provided over $52,000 for mission support to the church and other community organizations.
Tickets will be sold at the door ($12 adults, $10 seniors/students). The box office opens at 6 p.m. and the North Windham Union Church is located at 723 Roosevelt Trail in Windham. For more MWAMconcerts@gmail.com.
information please call 892-7149 or email

Don’t miss the Windham Chamber Singers on April 7th.  It will be a night of great music, and every dollar of your ticket price from this Windham Chamber performance will support RSU#14 school programs.

Posted by The Windham Eagle at 9:01 AM