The irksome images resulting from graffiti along the inside walls of Babb’s Bridge may be a thing of the past. The span connects the towns of Windham and Gorham over the Presumpscot River. Drivers and pedestrians passing through the wooden structure have long rued the crude inscriptions created by thoughtless and, some say, self-centered vandals.

The “art,” anonymous first names and colorful language have been met with reluctant acceptance for 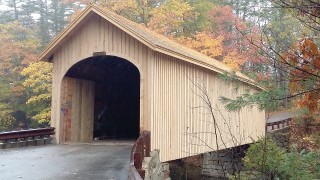 generations. But following the 2016 Maine Department of Transportation restoration of the bridge, some residents banded together to discuss ways to discourage the return of graffiti on the new, clean walls.

“If you leave (the graffiti), that says it’s okay to do it,” said bridge preservation activist Gary Plummer of Windham. He and others from Gorham and the state D.O.T. brainstormed ways to keep the historic span graffiti-free. Ideas included surveillance cameras, routine volunteer patrols and the application of a special solvent that resists paint. In the end, it was decided that a combination of willful surveillance and an immediate re-paint (over the graffiti) might discourage the return of the stealthy “artists.” Apparently, it has worked well for nearly a year.

Plummer says the walls received a coat of beige colored stain last spring. Now, as soon as the phantom literature re-appears, volunteers paint over it. The result, especially to those accustomed to the graffiti, is stunning. Even third graders from Windham Primary School commented on the clean, fresh look of the bridge’s interior as they toured the structure on a history field trip recently.

Plummer credits many in the determined effort to eliminate the unsightly images, including Gorham residents Guy and Janice Lebrecque, the Windham legislative delegation, the state D.O.T. and other interested citizens.

With summer just around the corner, round two of the “Keeping It Clean” campaign begins.

Plummer, who visits the bridge site regularly, says the wooden span receives a steady stream of visitors all summer, some swimming, some just enjoying the serenity of the water and the woodsy environment and out-of-staters posing and taking pictures. He encourages the activity.

“The more eyes on the bridge, the better;” And he adds that police from both towns have stepped up patrols of the area.

In the past 45 years, Babb’s Bridge has experienced two potential end-of-life calamities. Arsonists destroyed the ancient span in 1973. Saddened and concerned citizens from the two towns joined with the Maine D.O.T. to build an exact replica. Then, more recently, swimmers cut holes in a wall and in the roof of the structure to accommodate their high jumps into the water. Rot quickly set in. And, on further inspection, it was discovered that support stones on the bridge’s abutment had separated. Re-setting and cement were needed. An extensive overhaul ensued in 2016.

Historians disagree on the age of the bridge. Some place the time of construction in the 1700s. However, Joseph Conwill, author of “Maine’s Covered Bridges” (Images of America – 2003), notes “The historical record is never complete . . . (bridge) history is spottily recorded.” He places the construction of Babb’s Bridge (as a covered bridge) as 1864.

Maine once had more than 100 covered bridges. Only nine remain.

Posted by The Windham Eagle at 5:47 AM