As a recent transplant to the Lakes Region, I’m quickly learning summer in Vacationland means a house full of guests from “away!”

We recently hosted my mother, from Colorado, along with my sister and her two small children, who live in Maryland. This was a wonderful excuse to explore or re-discover many of the joys of Maine in the summer, including trips to the beach, ice cream every afternoon, and swimming in Crescent and Sebago until the kids were all shivering with blue lips. 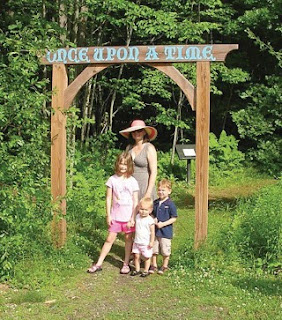 However, for all the fun activities in the afternoon, there were still a few times when we just didn’t know what to do with four kids whose ages ranged from 20 months to seven years. This tended to happen in the mornings, when it was still a bit early to contemplate pulling on a wet swimsuit, but we had to get the children out of the house, so they would stop fighting over who got to play with the toy tractor or sit on the left side of the couch or stomp on the pebbles in the driveway.

The perfect solution turned out to be Donnabeth Lippman Park in Windham.

This park, formerly known as the Chaffin Pond Preserve, is a 123-acre woodland with a ten-acre pond found just off Route 302. We were hoping the giant green playground would keep the children entertained long enough for the adults to finish their morning coffees, but the enormous slides and monkey bars failed to interest my niece and nephew. Apparently, they have playgrounds in Maryland.

Instead, Chaffin Pond itself proved to be a major attraction. Once we assured my three-year-old nephew that the pond contained neither crocodiles nor sharks, he was delighted to spend the morning throwing sticks in the little outlet stream and searching for frogs. After thoroughly traumatizing any frogs that happened to be lounging along the banks that morning, our family decided to venture on to the Story Trail, a very short loop located on the far side of the Donnabeth Lippman parking lot beneath the “Once Upon a Time” gate.

This Story Trail, hosted by the Windham Public Library, is composed of a row of signs, each featuring a page from a children’s book, so children and their adults can read as they hike the very gradual incline through the woods. As this was still early morning, we sprayed the children down with bug spray before beginning our adventures.

This month’s story is “Sheep Take a Hike”, written by Nancy E. Shaw and illustrated by Margot Apple. In this book, delightfully silly pictures accompany an easy to read story about sheep going on a hike which turned out to be significantly more adventurous than our family stroll through the deciduous forest of Windham. The trail itself was easy enough for even my 20-month-old niece, who my son dubbed “Crime Baby” after she pulled a poster off his wall, to navigate without too much difficulty.

While the challenges of stepping over roots and picking up acorns and sticks that she then tried to put in her mouth entertained the Crime Baby, the story itself kept the other three children engaged. My seven-year-old assistant ran ahead, with her three-year-old cousin and four-year-old brother in tow and read each page of the story to both the boys. She also made sure to point out a pileated woodpecker’s holes, beech leaves, dragonflies, and several other natural features she thought our “flatlander” visitors might appreciate.
In addition to the Story Trail, Donnabeth Lippman Park also features a longer 1.1-mile loop trail which circles Chaffin Pond and features several exciting board walks; but by the time we’d finished the Story Trail the children were asking for ice cream and the adults had finished our coffees. In a few more years, our cousins might be ready for something as adventurous as a 1.1-mile loop. But for now, the Donnabeth Lippmann Story Trail and Chaffin Pond’s tranquil, crocodile-free waters were enough to keep the houseguests entertained for a morning.

If you have young visitors of your own to entertain, you can find Donnabeth Lippmann Park off of Route 302 in Windham. Look for the stone sign just past the Sherwin-Williams Paint Store. Bug spray and sunscreen are highly recommended.