A matter of historical record: Honor and respect at last for Polin, sagamore of the Wabanaki by Walter Lunt

In an address to the citizens of Windham on the occasion of the town’s 100th anniversary in 1839, historian Thomas Lauren Smith referred to the region’s early Indian population as an “incursion from the savages” and “the subtle and savage enemy lurking in ambush.”

One hundred years later, in his “History of Windham, Maine”, author Frederick Dole described the Presumpscot chief, Polin, as “in possession of all the inherent cruelty of his race.”

From the 18th through the 20th centuries, students of local history might well have been left with the impression that early Native Americans of the Sebago region were instinctively brutal, bent on the annihilation of European colonists at any cost. 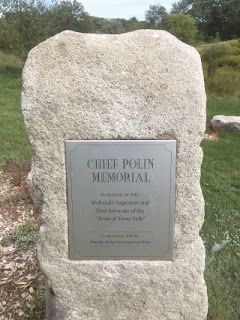 While both sides were responsible for growing tensions and hostilities during the white man’s early settlement and expansion along the 26-mile Presumpscot River corridor, modern historians have recently taken a fresh look at those early events. The result is a re-interpretation, of sorts, that doesn’t change the historical record so much as, well, correct it.

The first public acknowledgement of this historical “update” will take place this Saturday, September 29 off Conant Street in Westbrook. Friends of the Presumpscot River (FPR) has announced the establishment of a memorial garden in honor of Polin, the leader of a 1700’s band of Wabanaki Natives who returned to the Presumpscot (river of many falls) each spring to harvest migratory fish, including Atlantic salmon, shad, alewives and other species. The small band was fluid and mobile. Its aboriginal homeland was known to have included villages all along the Presumpscot, including Sebago Basin and the shoreline near the current historic Conant Farm, where anthropologists have interpreted that the Natives engaged in fish harvesting and planting corn, beans and squash.

FPR president Michael Shaughnessy, a former Windham resident who now lives on the old Conant Farm in Westbrook, says the long-overlooked aspect of Polin’s history in the region is his early attempt to maintain peace.

“He traveled to Boston twice (putting extra emphasis on “twice”) to negotiate for fishways on dams that blocked passage of anadromous fish,” referring to Polin’s personal meeting with Jonathan Belcher, then governor of the Province of Massachusetts Bay.

The Presumpscot was known to early explorers as one of the finest salmon rivers in what is now Maine and was a vital food source for Natives.

Polin’s plea for fishways was granted by the governor but ignored by Col. Thomas Westbrook of Saccarappa, who saw power and prosperity in the promotion of various mills and logging – all with little or no regard to the health of the river.

Long before the term ecology entered the lexicon, Polin and his contemporaries instinctively understood the concept of a sustainable relationship between people and the natural resource. They would take only what was needed and live within the natural world as one. This wholistic relationship was best described by Polin when asked by the Gov. Belcher where the Indian was from; “Pesumpscott is the river I belong to,” was Polin’s reply.

According to FPR’s Shaughnessy, the Conant Farm Memorial Garden is not only a recognition in honor of the early Native existence and their contributions but a celebration of triumph over ourselves, referring to the organization’s 25-year effort to restore fish migration and river quality.
In tribute to the river’s early Wabanaki presence, the garden features a series of strategically placed granite stones, or benches (from the old Conant barn foundation). Four large, rectangular stones lie prone facing east/west representing the four remaining tribes of the Wabanaki nation (Passamaquoddy, Micmac, Maliseet, Penobscot), another points north/south to represent the Presumpscot Natives and a standing stone which, according to Shaughnessy, is a counterpart to the memorial stone off Anderson Road in Windham that memorializes Chief Polin’s death in battle in 1756. Low-bush blueberry and elderberry plantings, indigenous to the area at the time of the early Natives, surround each stone. “A symbolic sense of connection,” says Shaughnessy.

One compelling feature in the garden is a plaque, in-laid on the upright stone, dedicated to the venerable Chief Polin, “First Advocate of the River of Many Falls.”

An unveiling and dedication, along with a celebratory fall harvest dinner takes place Saturday, September 29th at 5:30 p.m. What’s on the menu? It includes corn, beans and squash – to be enjoyed near the banks of the river we belong to.  <

Posted by The Windham Eagle at 8:58 AM