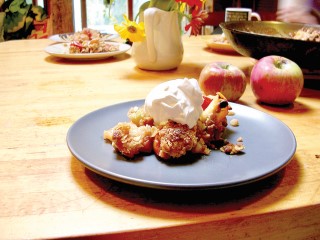 Now that it’s finally starting to feel like fall, what better way to celebrate the season than going apple picking in one of our local orchards?

My husband and I recently took our little assistants, ages four and eight, apple picking at an orchard near our house, and I’m happy to say that visiting an orchard is one of the most kid-friendly outdoor activities we’ve discovered. Our children loved exploring the fields. The four-year-old was especially delighted to find apples growing on trees!

“Usually, apples are in the store,” he told us about fifty times.

Apple picking was so thrilling that, between racing up and down the orchard and picking every apple they could reach, our assistants filled a massive bag in roughly the time it takes to say, “I think that’s enough apples for now, children.”

If you’re planning a similar apple picking adventure, here are two delicious, kid-friendly recipes to help you use up all of those apples. 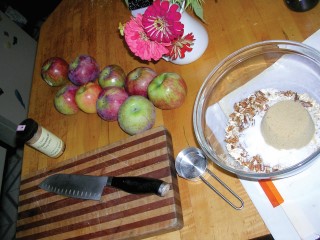 Three Step Skillet Apple Crisp
Because this recipe uses oatmeal, I consider it an acceptable breakfast.
Topping: 3/4 cups flour; 3/4 cups finely chopped pecans; 3/4 cups oats; 1/2 cup brown sugar (packed); 1/4 cup white sugar; 1/2 tsp. cinnamon; 1/2 tsp. salt; 1 stick of butter (melted)
Mix the topping ingredient together until mixture is crumbly. Set aside.
Filling: 3 pounds of apples (about 7 or 8 large apples), sliced and cut into wedges; 1/4 cup sugar; 1/4 tsp. cinnamon; 1 cup apple cider; 2 tsp. lemon juice; 2 tbs. butter
Preheat oven to 450. Toss the apples with the sugar and cinnamon.
Step One: Simmer the cup of cider in a 12-inch oven safe skillet for about five minutes. Transfer the concentrated cider to a bowl and add the lemon juice.
Step Two: Melt the butter in the now-empty skillet. Add the apples and cook, stirring frequently, until the apples soften. Stir in the apple cider/lemon juice mixture.
Step Three: Sprinkle the topping over the cooked apples. Place the skillet in the oven and bake until the apples are tender and the topping is golden brown, about 15 to 20 minutes.
Enjoy with some whipped cream or vanilla ice cream.

Apple Muffins
The streusel topping on these muffins is optional, but it does make for an irresistible muffin.
Streusel Topping: 1/2 cup sugar; 1/3 cup flour; 1 tsp. cinnamon; 1/4 cup cold butter
Combine the sugar, flour, and cinnamon. Cut in the butter with your hands or a pastry blender until it forms coarse crumbs.
Preheat oven to 425.
Muffins: 1 3/4 cups flour; 2 1/2 tsp. baking powder; 1/2 tsp. salt; 1/2 tsp. cinnamon; 1/3 cup butter (melted); 2/3 cup brown sugar; 1 egg; 3/4 cup milk; 1 or 2 finely chopped apples
Mix the flour, baking powder, salt, and cinnamon in a large bowl. Set aside. In a smaller bowl, whisk the melted butter and brown sugar. Add the egg and the milk. Gently fold the wet ingredients into the dry ingredients and add the apples. Top with streusel.
Bake the muffins at 425 for 5 minutes. Keeping the muffins in the oven, reduce the temperature to 375 and bake for an additional 12-13 minutes.

Posted by The Windham Eagle at 6:48 AM