For many families in Maine, it’s an annual holiday tradition to attend the Maine State Ballet’s performance of “The Nutcracker”. Wishing to see the local dancers, Adrienne and Rhiannon Pelletier perform, I attended the Christmas ritual for the very first time on Saturday, November 24 and now understand the reason for its popularity.

It is true that the choreography is impeccable, the stage is filled with magnificently stunning sets and the costumes are among the most fiercely impressive I have ever seen. However, the ballet performances of Adrienne from Raymond (who played Clara last weekend) and her older sister, Rhiannon of Casco (the Sugar Plum Fairy) were just as impressive, if not more. If you have not yet seen the two of them perform, I would highly recommend that you do so.

Both sisters have performed and danced with the Maine State Ballet since they were young. “I have performed in shows all of my life and have played Sugar Plum Fairy the past couple of years,” Rhiannon stated of the prima ballerina position. “This is the first time that my sister and I will share a role – and share the same partner.” Rhiannon admitted she is very excited that her sister will make her debut in the most sought-after role in “The Nutcracker”.

Adrienne will be the Sugar Plum Fairy in this weekend’s performances and is happy to give up her role as Clara. “For years the Sugar Plum Fairy handed me her wand at the beginning of Act II as I sat on the throne as Clara, and this year I get to hand the wand to a new Clara,” she stated in a recent press release. 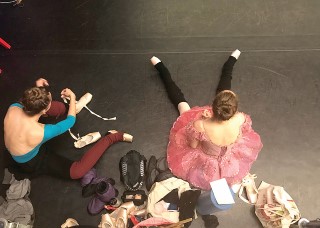 If Adrienne receives the roaring applause that her sister was met with last Saturday evening, she will be on top of the world. Rhiannon shared what it’s like to receive that level of appreciation from the audience. “It’s my favorite feeling in the world,” she began. “Before you step out on to the stage, you have ‘jelly legs’ but once you hear that applause you know everyone is on your side. You begin to relax and step into your role with reassurance.”

Tickets are $20 to $70, with discounts available for groups, seniors & children, and are available through Porttix at 207-842-0800, www.porttix.com, and at the Merrill Auditorium Box Office located on Myrtle Street in Portland. Friday, November 30 is Student Night for High School and College Students with valid ID. These $10 tickets can only be purchased by calling or visiting the Merrill Auditorium Box Office.

Posted by The Windham Eagle at 7:09 AM