It's not often that you get to dance the role of Sugar Plum Fairy in Maine State Ballet’s “The Nutcracker” (in the last 42 years there have been a little over a dozen ballerinas who have done it). It’s an even rarer event when sisters get to share the role. Meet Adrienne and Rhiannon Pelletier of Raymond and Casco: Sugar Plum Sisters!

Both sisters grew up in Raymond and danced at Maine State Ballet since they were young. “Older sister” Rhiannon is in her 6th year playing the Sugar Plum Fairy. She is a graduate of St. Joseph’s College and now balances her dancing career with being artistic director/owner of Maine Dance Center in Raymond. “What I like about “The Nutcracker” is that you just get submerged into this fantasy world and forget about real world things”. 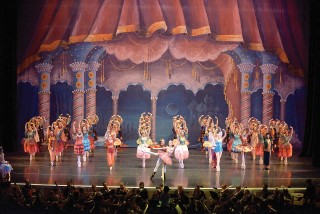 Maine State Ballet  will kick off the holiday season with eleven performances over three weekends of its classic production of “The Nutcracker”  Friday, November 23 through Sunday, December 9 at Portland’s Merrill Auditorium.

Set in the early 19th century Germany, the ballet features well-known characters such as Clara, Uncle Drosselmeyer, the Nutcracker Prince, and the Sugar Plum Fairy. This year the role of Clara is shared by Emma Davis and Laura Moskevich, both of whom will be making their debuts. Arie Eiten and Trevor Seymour will share the role of Nutcracker Prince. Principal Rhiannon Pelletier, and First Soloists Julia Lopez and Adrienne Pelletier split the role of Sugar Plum Fairy. They will be partnered by Michael Hamilton. Jonathan Miele plays the mysterious Uncle Drosselmeyer, and Principals Glenn and Janet Davis appear as Judge and Mrs. Stahlbalm.

Tickets are $20 to $70, with discounts available for groups, seniors & children, and are available through Porttix at 207-842-0800, www.porttix.com, and at the Merrill Auditorium Box Office located on Myrtle Street in Portland. Friday, November 30 is Student Night for High School and College Students with valid ID. These $10 tickets can only be purchased by calling or visiting the Merrill Auditorium Box Office.

Posted by The Windham Eagle at 3:21 PM