Sipping hot chocolate, eating holiday cookies and sitting around the warmth of a fireplace while singing your favorite carols invokes heart-felt images of Christmases past. Young and old alike yearn for long-ago traditions that inspire the true meaning of Christmas. There is nothing more to set the mood for the holiday season than to celebrate the old-fashioned way with caroling and a readers’ theater.

Faith Lutheran Church, 988 Roosevelt Trail in Windham, invites the community for an evening of Christmas carols followed by a special readers’ theater performance of Truman Capote’s, “A Christmas Memory” starring Laura Morris (Director of Be The Influence) and Tom Nash (Director of Windham/Raymond Adult Education). 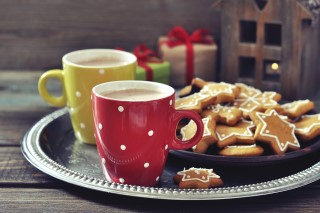 The event will occur on Saturday, December 1 and Sunday, December 2, to begin at 4 p.m. on both
days and will include Christmas cookies, pastries, hot chocolate, coffee and tea. The cost of the fundraising event, desserts and warm drinks are on a donation basis. A portion of the proceeds will go toward Project Grad 2019. Raffle items donated by various community businesses will also be available and will be auctioned off during intermission.

“A Christmas Memory” is a holiday classic that is an autobiographical tale of Capote’s young life and takes place in the 1930s. It describes a period in the lives of the seven-year-old narrator (played by Nash) and an elderly woman who is his distant cousin and best friend (played by Morris). The story focuses on country life, friendship and the joy of giving during the Christmas season. It’s also about loving one another despite differences in age, income, perceptions and more.

"For Christians, the Christmas message is one of incarnated love,” explained Pastor of Faith Lutheran, Jane Field. “The wonderful members of Faith Lutheran Church live out their love of neighbor all year long. At Christmas time, they want to give the Windham community a gift that expresses that love through joyful singing together of beloved carols, feeding our neighbors home baked goodies, and listening together to a story about loving one another as God loves us, all while raising money for a good cause. We hope this gift will be received by the community in the spirit in which it is given: the merry and glorious Spirit of Christmas.”

The early two-evening event will begin with a 45-minute traditional and modern community caroling followed by the readers’ theater with an intermission between the two performances. The Music Director of Faith Lutheran Church, David Hansen, has worked hard in pulling the celebration together.

“In preparation for our old-fashioned Christmas celebration, I administered a survey among our Faith Lutheran members, asking for a personal favorite as well as the least favorite Christmas carol,” explained Hansen. “As a musician, the first thing that can set off my inner Scrooge is hearing Christmas music way too early, especially Christmas tunes that are so annoying they don't deserve air time any time of the year. The survey revealed many surprising results and on December 1 and 2, we’ll discover together what the favorites and least favorites were among those surveyed. Come sing a very eclectic compilation of carols through the years.”

Hansen also stated that the reading of Truman Capote's simple and humble recollection of “A Christmas Memory” shares a heart wrenching story, so subtle that it can't help but stir and revive the Christmas spirit and bring joy to your soul. “No humbug guaranteed,” Hansen joked.

Posted by The Windham Eagle at 4:14 AM