The two colleagues met in the teachers’ room at Windham High School during the opening weeks of the 1963 – 64 school year; it was Earl Pike’s first year of teaching.

He exchanged pleasantries with retired teacher Marion Hodgdon, who was a substitute teacher that day. 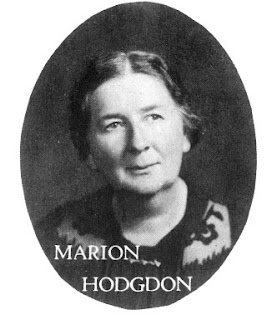 Pike told her, “I teach mathematics,” to which Hodgdon replied, “No, you do not.”

Puzzled, Pike rejoined, “Yes, I do. I teach mathematics.”

“No, you teach children. You teach students.” came the sharp rebuke, as Hodgdon stared back with the confident, knowing look of 50 years teaching experience.

“She was correct,” said Pike, who now lives in Casco, “and that was a lesson (I never forgot) for my next 30 years of teaching at Windham High School.”

Hodgdon was born on Oct. 18, 1889 in Windham in what is commonly referred to as the old “Lorenzen house,” next to Field Allen School. In her autobiography, written in the early 1960s, she explained that she attended Windham High School, located at that time in what is now the Windham Historical Society’s Town House Museum on Windham Center Road, graduating in 1906. Hodgdon wrote that she knew early-on she wanted to be a teacher, possibly inspired by her early years attending a one-room schoolhouse at Windham Center. “I have (only) pleasant memories of those early years,” wrote Hodgdon.

Hodgdon secured her first teaching job at the Ireland School in East Windham. “It was a real challenge, with all grades from the beginners to the ones preparing for high school – about twenty-five (lessons) a day. I received eight dollars a week.”

At the end of her fourth year at Ireland, Hodgdon was transferred to Friends School, another one-room school located on the corner of Gray Road (route 202) and Swett Road. The move included a pay raise: $10 per week. She called it, “a great advancement.”

One year later, another promotion. Hodgdon was assigned the principalship at a North Windham schoolhouse, along with a whopping 20% raise. She now earned $12 a week, which was the top of the pay scale in Windham and in most Maine districts.

Seeking a boost in salary, Hodgdon moved out of state and spent the next few years teaching in Vermont and Massachusetts. “I left for greener fields doing departmental work…specializing in English and history in what was soon to be known as junior high.”

By 1923, Hodgdon said she believed she had “reached my (career) goal,” and was ready to come home. She returned to Windham and became a switchboard operator at the Windham Center telephone office.

That same year Marion married Howard Hodgdon and moved to Portland where the family “increased to five, (so) there was plenty to do at home.” She would also be a substitute in the Portland schools.

By 1934, the lure of her home town brought the family back to Windham. “Windham has always been a progressive town and has always been proud of its schools. I had the privilege of serving on the school board (for) three years. I never regretted the decision to return.”

The Hodgdon’s bought and restored an old home at Windham Center. On the property were the 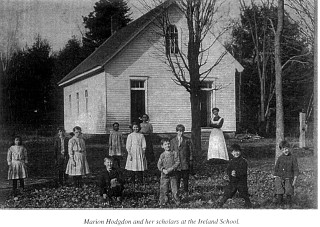 remains of the ancient Parish Church – abandoned, tattered and crumbling. Considering it an eyesore and safety hazard, the Hodgdon’s proceeded to tear it down. But, to many town residents, razing a church bordered on blasphemy. The church came down, but the resulting controversy was troubling for the family. Marion would avoid many opportunities to mingle in the community, preferring to, as she would often say, “mind my own business.” Two exceptions were a garden club and involvement in her town’s storied history.

“She had a green thumb,” observed grandson Alan Hodgdon, Jr.; she favored violets and geraniums. Beyond family, gardening and reading (especially Thoreau), local history was a passion. She was heavily involved in the town’s five-day 200th birthday celebration in 1938, helping to publish a thick booklet called “Windham Invites You”, and heading up the pageant committee.

By the outbreak of World War II, Marion and Howard’s children had grown. Two attended college and became teachers. Their son, Kermit, remained in Windham where he became a well-known and highly respected member of the community. In 1947, Howard died after a sickness of several months. Given her exemplary reputation as a teacher, Marion was asked to become part of the new school consolidation. “I consented to try it for a few weeks. These weeks developed into sixteen years.”

It was during those years that Hodgdon was given the nickname “White Fury” by her students. Over her many years of classroom experience, particularly the early ones in a one-room schoolhouse, she had devised a no-nonsense code of discipline. “She had white hair and a low tolerance for people who didn’t follow rules. You never acted up in her class.” said grandson Kermit, Jr.

Her passion for local history led her to teach the eighth grade course in Windham history. The textbook, “A History of Windham, Maine” by Frederick H. Dole had been written in conjunction with the 1938 bi-centennial.

Shortly before Hodgdon retired in 1960, the Windham School Committee eliminated the Windham history course (doubtless in response to the education scare prompted by the Soviet Union launch of Sputnik). One of her students recalls Mrs. Hodgdon’s anger over the move. “She came to U.S.

History class on the first day. She asked if Windham, Maine was in the United States? We all nodded yes. She then proceeded to pass out the Windham history texts.”

Windham resident Ray Philpot said Hodgdon “turned on the light for me in liking history. In school, year after year, all the history classes just seemed to teach the same thing over and over, but she really sparked my interest. I’ve been a local historian ever since.”

In retirement, Marion Hodgdon was pressed into service numerous times as a substitute teacher. It’s been said that the regular classroom teacher knew it was folly to leave lesson plans for her. They would be ignored as Mrs. Hodgdon preferred to replace them with Windham history lessons.

She was twice honored by local organizations. High School principal Richard Dunn called a special assembly where Hodgdon was named an honorary member of the National Honor Society (she wore the gold pin often and with pride.)

In 1967, Windham Kiwanis honored her with a Senior Citizen Award that read, “In Grateful Recognition of the many years of faithful work, unselfish effort and dedicated service to this community.”

“She was a career woman at a time when women were not encouraged to do that,” observed granddaughter Brenda (Hodgdon) True, “she was a wonderful grandmother. Growing up, we (the grandchildren) would often stay with her for days at a time to keep her company and help out. She couldn’t sew a button, but we all remember the molasses and peanut butter cookies.”

Marion Hodgdon continued substitute teaching up to within a year of her death in 1975. She was 86 and, said granddaughter True, “had a good life.”

Added Kermit, Jr., “a teacher through and through.”