Music with a Mission is proud to present Side by Each featuring Don and Cindy Roy along with Erica Brown and Matt Shipman who together meld their talents of French Canadian, Celtic and Bluegrass music and step dancing. The event will occur on Saturday, March 30, at 7 p.m. at the North Windham Union Church, 723 Roosevelt Trail in Windham.

Don and Cindy Roy are firmly rooted in the Franco-American musical tradition. A champion fiddler, 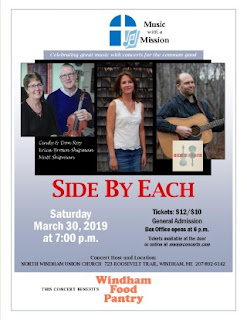 Don is also a celebrated luthier, playing his beloved music on a fiddle he crafted himself. Don embraces each part of the music and audiences are quickly caught up in the infectious joy he shares. Cindy Roy is known as the heartbeat of the group, marking the pulse of each tune with her percussive footwork as she accompanies Don on piano.

Cindy also showcases her footwork with the occasional stepdance. Don and Cindy live in Gorham and are dedicated to passing on their tradition and love of music to others. Since 2000, they have led Fiddle-icious, a community fiddle orchestra with more than 100 members. Last year, Don and Cindy were awarded a National Heritage Fellowship — the nation’s highest honor in the folk and traditional arts—recognizing their artistic excellence and continuing contributions to our nation's traditional arts heritage.

Erica Brown studied fiddle under Don Roy at an early age and was competing in fiddle contests at the age of seven. As a 9-year old, she was traveling throughout New England, Canada and Louisiana with the Maine French Fiddlers. Erica brings a special energy and style to the Maine music scene, and she is widely recognized as one of the best fiddlers in Maine.

Erica lives in Portland with her husband Matt Shipman where they operate a teaching studio offering lessons and perform together as Darlin Corey and in various other groups, ensembles and jams.  Matt is a very accomplished musician playing guitar and mandolin, bouzouki and clawhammer banjo.  Erica and Matt performed at Music with a Mission last fall as the popular Erica Brown and the Bluegrass Connection.

The Music with a Mission concert series is sponsored by the North Windham Union Church, which donates a portion of the proceeds to area non-profits.  During the first six seasons, MWAM provided over $60,000 for mission support to the church and other community organizations. Side by Each has chosen to support the Windham Food Pantry that provides food assistance to people in need throughout the community.

Tickets will be sold at the door and are $12 for adults and $10 for students and seniors.  They are also available online at mwamconcerts.com.  The box office opens at 6:00 and the doors will open at 6:30.  For more information please call 892-6142 or email MWAMconcerts@gmail.com.