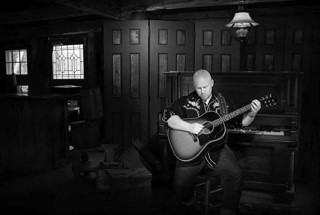 On Saturday, April 27th, at 7 p.m., Music with a Mission is proud to present Travis James Humphrey for a fun evening of original music along with some of the best covers of country, folk and honky-tonk favorites.

Travis James Humphrey is a professional musician and Northern Maine native who learned his trade from his father, Tim Humphrey.  After high school, Travis served with the United States Air Force as a bandsman for 8 years.  He returned home to Maine in 2003 and became a working musician performing regularly to packed houses at Lenny’s and other clubs throughout Southern Maine.

The Music with a Mission concert series is sponsored by the North Windham Union Church, which donates a portion of the proceeds to area non-profits.  Now in our seventh season, MWAM has provided almost $62,000 for mission support to the church and other community organizations.

Travis James Humphrey has chosen to support the RSU14 Windham Raymond Backpack Program in their efforts to provide food to 150 students in 3 elementary schools each weekend of the school year giving balanced meals for the food insecure.

Tickets will be sold at the door and are $12 for adults and $10 for students and seniors.  They are also available online at mwamconcerts.com.  The box office opens at 6 p.m. and the doors will open at 6:30 p.m. The North Windham Union Church is located at 723 Roosevelt Trail in Windham. For more information please call 892-6142 or email MWAMconcerts@gmail.com.

Posted by The Windham Eagle at 1:41 PM