PowerServe, originally planned as a one-time event to honor the life of Shane Donnelly, is now in its fourth year and has become a much-anticipated annual event. This year, PowerServe, which will be held on Monday, May 27th (Memorial Day), is shaping up to be bigger and better than ever. 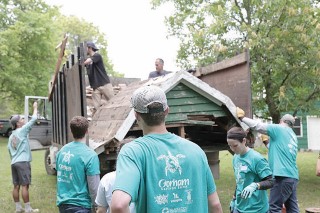 Young Life Sebago organizes the event, which was founded four years ago to bring students, family members and community residents together to serve people in need throughout the community. A wide range of projects is planned, from painting and cleaning to building and maintenance.

Kristine Delano said this year the committee has expanded its requests for sponsorship to be able to do some more extensive projects. “Sometimes, there’s a limitation to what we can do at a house because of not having the funding to do some of those things,” she said.

Gorham Savings Bank has been the gold sponsor since the first year of PowerServe.  Other sponsors include Lowe’s in Windham, Sherwin Williams in Windham, Shaw Earthworks, Island Cove Building and Development, Benson Farm, and Windham Rental. “That makes a difference in our ability to provide people with more than just yard clean up,” said Delano.

The committee is also expanding the number of projects this year. Last year, teams completed 22 projects. This year, Delano said, they’re on track to do thirty. “That’s really a blessing, to be able to do so many things and be so many places,” she said.

Being in their fourth year of PowerServe has helped them build credibility, Delano added. When people see how hard the teams work, she said, they want to be a part of it. Their growth helps them share the message that by serving together, they strengthen the sense of community, she said.
The move to holding PowerServe on Memorial Day also helped the program grow, she said.

Previously they had struggled with fitting in a day for service amongst family and sports obligations. Having a full committee to share the work has also made a big difference.

While in the first year, approximately 60% of volunteers were students, this year it seems more evenly divided into thirds, Delano said: one-third students, one-third family members of students, and one-third members of the community that have learned of the project in other ways.

Delano said it’s been nice to see the growth, and to watch cross generational teams work together.  Participants can sign up to work with their family and friends, but Delano said they also try to encourage people to meet new people and develop new friendships as they work.

Anne Daigle, another member of the committee, said one of her favorite moments of the event is at the barbeque, when she sees people choose to eat with the group they worked with instead of who they came with.  “I love to see that they got to know each other a little bit, and they want to sit down and eat with them instead of the people that they already know. I think that’s really cool.”

Morgan Colangelo and Rachel Frost are student members of the committee. They are working at the high school to get sports teams, clubs, and other students involved.

“For me, it’s important to be involved in it because it brings everyone together in the community in a serving way, and you’re with people that you’re not typically working with. To be able to see people working towards a common goal together just to help one thing is a pretty amazing feeling,” Colangelo said.

“It’s a really impactful day,” said Frost, adding that her family has been participating in PowerServe since the first year. They travel on Memorial Day weekend, she said, but make a point to get back in time to participate.  “It means so much to our family seeing the whole community come together like that. It’s not just every day that you get to see that type of teamwork.”

Young Life Leader Cole Milazzo said that often people are reluctant to open themselves up and try new opportunities. “There are many opportunities to engage in community, but [PowerServe] is the only one I’ve been a witness to, in this area, where you have hundreds of people from Windham willing to take that step out and engage in the community that they live  in, hear stories and have conversations they wouldn’t have with people any other time,” he said.

Alex Thuotte, another Young Life Leader, added that people may be hesitant, wondering what the hidden agenda is. “I love being on this committee, being with PowerServe, because there’s no hidden agenda. The end goal is just to serve.”

There are both repeat projects and new projects each year.  The committee reaches out to the community to help identify those in need.  They strive to serve anyone in need, whether it’s the first time or the fourth they’ve needed help.

Delano said that there’s now a lot of history and recognition of what PowerServe is.  Colangelo said PowerServe is becoming a topic of conversation in the hallways at the high school.  It’s nice, she said, to hear others giving good feedback about the event and encouraging others to participate.
Volunteers are still needed, and anyone interested in participating is welcome.  Registration begins at 1 pm and projects take place from 1:30 to 5 pm.  After the event, all participants are invited to a barbeque put on by the Donnelly family. For more information or to sign up, visit www.sebago.younglife.org.

Posted by The Windham Eagle at 6:21 AM