If you’ve been to the Raymond Village Library recently, you’ve no doubt noticed the original artwork adorning the bookshelves and walls. This past July and August, thanks to a partnership with the Raymond Arts Alliance, the library hosted a father-son art show featuring paintings by the award-winning artist Holden Willard and sculptures by his father Don Willard, who is better known as the Raymond Town Manager.

Also, if you’ve wandered into the children’s section of the library this past week, you might have 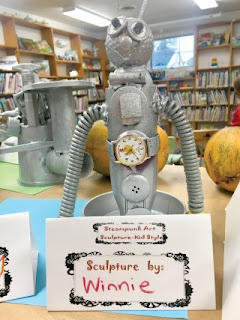 “You can use old clocks, gears, gauges, tools, or anything technological,” Perry explained in a Facebook post describing the event. “Anything that can be glued together into an interesting assemblage will help us!”

Several young participants brought their own found items, including an old telephone and an electric toothbrush, to donate to the creation of their sculptures. Karen provided empty plastic containers to both hold items and serve as the base for several sculptures. The young artists soon covered the library’s table with gears, wires, electrical cords, and more as they began creating their sculptures.

While the adults operated the hot glue guns, children created robots, animals, and more out of their piles of old jewelry, scrap metal, and broken appliances. More than one parent, including this writer, stepped in to “help” their children and ended up creating a new sculpture themselves. Several visiting library patrons asked if adults could join the fun.

“There was so much interest in the children’s event that we’re going to host a found-art session for entire families,” Allison Griffin, the Raymond Village Library director, explained. That event will be held later this fall.

As the children put the finished touches on their projects, Perry offered each participant a battery-operated candle to glue onto their creation so the children’s sculptures could include light, like several of Don’s pieces currently on display in the library. When the children finished their masterpieces, Perry made a careful list of which parts of the sculpture should be painted and which parts should remain their original color.

That evening, visitors to the Raymond Arts Alliance’s Meet the Artist event with Don and Holden Willard were treated to the first ever showing of the children’s steampunk assemblages, which had been spray painted silver to look like Don’s metal sculptures.

“Wow,” young artist Ian Bizier said when he viewed his painted sculpture for the first time. His battery-operated candle flickered above a silver column of gears, buttons, and electrical cords while a compass needle spun near the base. After Perry carefully painted the children’s sculptures, they really did look very much like Don Willard’s creations.

“Miss Karen is so awesome!” Ian declared with a smile.

To see the children’s steampunk art for yourself, or to sign up for the upcoming family session, please contact the Raymond Village Library.