New skate park opens in Windham: A popular destination for skateboarders from miles around

In 1999, Windham opened a wooden skate park as a joint effort with the police department and the recreation department. This park was enjoyed by skaters for many years. By 2016, the park had to be shut down because of disrepair. 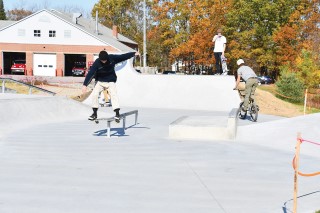 What followed was a plan to replace the skate park as part of a larger community park which would also include basketball and volleyball courts and walking paths. Recently, the new skate park opened on Gray Road near the Public Safety building.

Last year, skaters attended the Windham Community Skate Park public meeting at Windham Town Hall to discuss the design of a new skate park. Windham resident, skater and individual involved with the process from the beginning, Matthew Howe was in attendance.

“From the user’s perspective the old skatepark was fully functional but from the perspective of a structural engineer it just was unsafe and had to go,” observed Howe.

Howe went on to say that the skatepark design meeting started by the skaters talking about Windham Skatepark history as well as Mackenzie MacVane.

As stated in a previous Windham Eagle article, ‘MacVane of Windham died at the age of 13 in an accident at El Weir Dam. He left a memorable mark on his friends. He was a member of the Dare to Adventure Program, a community program supervised by School Resource Officer, Matthew Cyr. “He was perhaps one of the most positive people a person could meet,” Cyr said in an email interview.’

Present at the public meeting was an American Ramp Company representative who gave the skaters a questionnaire so everyone had input on the new skatepark. “The process made me very happy and seemed solid; left me feeling excited for the future,” said Howe.

“We ended up seeking land and water conservation funds, to be able to do the project,” stated Brooks. “That requires a match by the town; basically it’s 48% the federal government and 52% the town. We had to put the project out to bid, that’s a requirement.”

The bid estimate came in at $170,000 for the skate park. Brooks explained that constructing the community park would be done in phases and phase one was getting the skaters skating again. So far, they are on budget.

“Our hope is that we can get an extension of time for the grant process...[a]state contact indicated we could likely apply for an extension of grant funding and time and continue getting some more work done; in the process of working toward that end,” added Brooks.

“Additionally, we will continue to budget out through the capital improvement plan, the use of impact fees that get distributed to the department for development and expansion of recreational facilities. As the funding becomes available, we will continue to work on subsequent phases of the project.”

BMX biker Logan Tripp, 19, a Direct Support Professional and Certified Residential Medication Aide from Oxford Hills, drove 45 minutes to get to the new skate park.“A couple of my buddies on Instagram said, ‘come and shred the park’. I used to shred it back in the day, when it was wood. Pretty decent park now, I like it.”

Howe has been to the skate park every day since it opened and said, “once you skate there, you’ll never want to leave.”

“We know it was hard, the park appeared ready to be skated on two weeks prior to us saying ‘yep it’s open now,’ so we appreciate the skater’s patience. We’re happy we were able to get that logo back up to honor McKenzie MacVane.”