Book Review: “This Poison Will Remain” by Fred Vargas 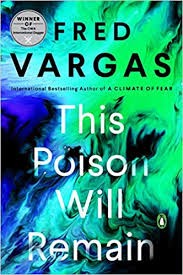 After I read “This Poison Will Remain” by Fred Vargas, I read a review that said no one should start with this book. I didn’t know when I started it that it was part of a series. While it might be best to start at the beginning, I did not find it confusing. For those interested in reading the books in order, the first is “Have Mercy on Us All”. All the books are translated from French.

“This Poison Will Remain” opens with Commissaire Jean-Baptiste Adamsberg being recalled to Paris to work one case and then another. The first he solves quickly and rather cleverly. The second case is the main thrust of the story. Three elderly men have died from recluse spider bites and the Commissaire thinks it is murder. His team widely and vocally disagrees—it would take some forty recluse spider bites to kill a person and recluse spiders don’t bite all that much (they’re pretty reclusive, after all).

His investigation leads him to an orphanage, then to a group of boys called the Recluse Gang, then to an even sadder, more troubling story. It’s rare that I’m emotionally moved by a mystery, but I cried at the end of this one. The characters are incredibly well-drawn, distinct, human and relatable. The story is not exactly fast paced, but it’s twisty and well-plotted. I was pretty sure I knew where this was going, and then it went somewhere else.