Student of the week: Geovanni Mateo 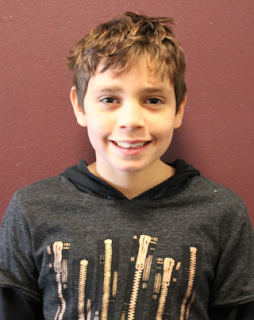 Geovanni Mateo, a fifth-grade student from Jordan-Small Middle School is The Windham Eagle’s student of the week.

“Geo is a great student! He is kind, helpful and hardworking,” stated his teacher. “Every day, Geo enters the classroom with a smile on his face and a ‘let’s go’ attitude. He is proud of his educational risk-taking ways. He has the ability to show what he knows by solving math problems in front of the class. In ELA, he is a great group leader and is known for his positive attitude.”

When interviewed, Geo shared that his favorite school lunch includes pizza, his favorite class is science, he likes to play soccer at recess, and that he cares about his friends.

Outside of class, Geo likes to build with Legos and play soccer. His favorite book is “Sidetracked” by Diana Asher. He has several pets including a bunny, an iguana named Shilo, a snake named Gretchen, and several chickens. Congratulations to Geovanni Mateo!