“It’s going to be spectacular.” That’s the prediction and the promise of Windham’s own Bill Diamond, who is the chair of the Maine Bicentennial Commission.

The official kick-off was last July in celebration of Maine’s vote to secede from Massachusetts in 1819. Statehood was realized the following March 15, 1820.

Observances throughout nearly all of 2020 will include parades, history programs, conferences, art 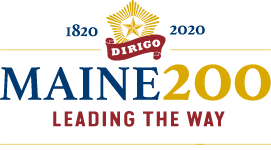 and music, bell ringing and an exploration of Maine’s future.

“We’re going to have fun with this,” said Diamond, “…we’ll explore the past, celebrate who we are now, and establish a vision for our future.”

Citizens are encouraged to be involved by participating in the many and varied observances.  Some are happening locally, others throughout Maine.

Now Through February 28 – Windham/Maine200 photo scavenger hunt. Teams are challenged to locate and take pictures of historical sites in the community. Details at windhamrecreation.com, or call 892-1905.

Saturday, March 14 – A Bicentennial Tea from 1:00 to 3:00 p.m. at the Little Meetinghouse, 719 Roosevelt Trail consisting of craft and trivia activities, cake and tea, and special recognition of participants in the photo scavenger hunt.

Sunday, March 15 – Church bells will ring in Statehood Day at noon in Windham and throughout the state.

Saturday, June 6 – An Old-Fashioned Bicentennial Bazaar from noon to 4:00 p.m. at the Village Green living history park on Windham Center Road (parking behind the Windham Historical Society’s Town House Museum). Described as an authentic country fair, the event will feature a number of game and food booths and special entertainment by Windham’s third grade chorus and musician Dave Rowe singing historical songs in the gazebo. Local well-known artist Rick Charette is expected to perform a specially composed song about Windham’s past. Greeters in period costumes will welcome guests who can browse the Village Schoolhouse, watch a blacksmith at work and view historic displays in the museum.

Saturday, June 20 – Windham Summerfest. This year’s theme is the Bicentennial, ‘bringing unity to the community.’ Appearing on stage will be Cousin ITT (Rick Nickerson, Tom Noonan and Jeff Neal). Also, from noon to 3:00 p.m. a bus tour and presentation of historic sites in Windham (see Windham Raymond Adult Education 2020 catalog).

Statewide events and observances include, but are not limited to:

Sunday, March 15 – Statehood Day celebration in Augusta will feature special events, speeches and the unveiling by the U.S. Postal Service of a commemorative stamp in honor of Maine200.

Monday, May 18 – Bicentennial Parade in Lewiston-Auburn. Fashioned after the grand centennial parade in Portland in 1920, the Bicentennial Parade will feature bands, floats and numerous other participants that will honor various peoples and cultures of Maine’s past, present and future. Gov. Mills will serve as grand marshal, along with all living former governors. A unique part of the parade will feature what Diamond described as an intergenerational marching band that will include musicians from all over the state, ages 13 and up.

October 10-12 – The Maine Innovation Expo in Bangor is intended to spotlight Maine’s future and will showcase the state’s world-class ingenuity and expertise. Displays will highlight innovation, research and technology from all sectors of the Maine economy. One astounding creation crafted by the University of Maine Composite Department in Orono will be a 5-pointed star standing six feet tall. A time-capsule will be sealed within each point of the star representing 25-year increments. It will be kept on display at the Maine State Library.

Due in part to Maine’s extensive plans to celebrate its 200th birthday, one website has ranked the state as the fourth most desirable place to visit in 2020. As a result, says Diamond, “…one of our more subtle goals is to increase tourism and hope that some will even stay.”

“We’ve been planning this for two years,” he continued, “we’re trying to discover all we can about Maine’s past, appreciate who we are today, and influence who we will be in the future.”