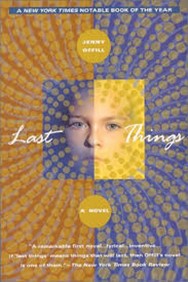 I’ve been a fan of Jenny Offill since reading “Dept. Of Speculation” which I think is an amazing feat of flash fiction. Her debut novel, “Last Things”, was recently re-released and I’m now equally enamored with the novel as I am with the flash fiction.

This novel is told from the tender and precocious point of view of eight-year-old Grace, whose mother is at once fantastic and unpredictable, joyful and full of despair, loving and disappointed. Her father is certainly steadier than her mother, but he, too, is imperfect. What I love about Offill’s writing is how she renders her characters as fully human—dark and light, good and bad.

We follow Grace through a strange road trip with her mother and her father’s acceptance of the role of Mr. Science on TV. Through her, we meet her odd cousins, her in-love-with-her-mother boy-genius babysitter. We get facts peppered in from her scientist father and ornithologist mother’s take on the world. There’s no way not to adore Grace.

Offill is funny and, I can’t say this enough, kind to her characters. She has heart. And, she uses an incredible amount of restraint in her work which, for me, makes the work clear, precise, and un-put-downable.