On Saturday, March 14th, at 7:00 PM, Music with a Mission is proud to welcome back The Collins Band for an evening of great music.  The Collins Band, based in Southern Maine, plays a mix of modern and classic blues, jazz, and Americana. 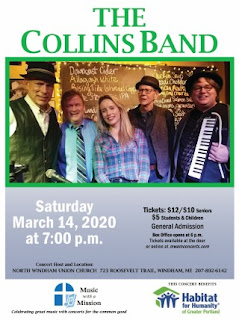 the good stuff in between. The Collins Band includes

“We are looking forward to The Collins Band’s return to our Music with a Mission concert series,” said Dr. Richard Nickerson, Minister of Music for NWUC. “We featured them last year and immediately got requests to bring them back again.” Since then they’ve been busy with plenty of gigs, expanding their repertoire and expanding the band with Chuck Prinn on drums.  It’s sure to be another great show.

The Music with a Mission concert series is sponsored by the North Windham Union Church, which donates a portion of the proceeds to area non-profits. During the first six seasons, MWAM provided over $65,000 for mission support to the church and other community organizations.  The Collins Band has chosen to support Habitat for Humanity of Greater Portland with the community proceeds from this concert. Seeking to put God’s love into action, Habitat for Humanity brings people together to build homes, communities and hope.  Over the past three decades, they’ve built 91 homes, providing hundreds of people with stable, affordable housing.

Tickets will be sold at the door and are $12 for adults, $10 for seniors and $5 for students and children.  They are also available online at mwamconcerts.com.  The box office opens at 6:00 and the doors will open at 6:30. The North Windham Union Church is located at 723 Roosevelt Trail in Windham.  For more information please call 892-6142 or email MWAMconcerts@gmail.com.

Posted by The Windham Eagle at 2:30 PM