Older, retired adults may not be impacted by stay at home orders in the same ways as younger professionals or those with young children at home, but pandemic limitations bring unique challenges to the older population, including loneliness, isolation from family, inability to participate in volunteer services that bring purpose and joy to their lives, and access to essential items, such as groceries.

Royal “Corky” Slack, who is 88, has been an active volunteer at the Windham Community Garden, an activity he can no longer enjoy during the quarantine. Slack and his wife have lived at the Gorham House in Gorham since their return to Maine in 2019. 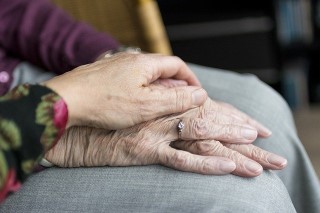 When he and his wife moved to Florida fulltime, Slack remained on the mailing list for the garden.

When they returned to Maine, Slack said he wasn’t interested in a plot for himself, since they no longer had to cook. But he knew the garden had been working with the food pantry and volunteered to tend the food pantry tomato plot.

The quarantine has prohibited his being able to go to the garden, but he hopes to be able to return to it soon.

The administration at Gorham House has done a great job of keeping the virus at bay, Slack said, and the facility hasn’t had any cases of COVID-19. Overall, Slack said, he and his wife are doing well.

Though they can’t have typical family visits, their family has come to visit through their window, like when his son and some of his grandchildren showed up with signs on his birthday.

“When we view what’s going on in the world, we feel pretty blessed that we’re being taken care of,” Slack said.  Still, he added, “I really look forward to working in the garden – because of the people.”

Raymond resident Becky Alstrom said she and her husband haven’t been impacted too greatly by staying at home, since they are retired and used to staying home.

As Master Gardeners, she and her husband have a massive vegetable garden that she tends ever year.

In March and April they planted seedlings for this year’s garden.  She said they have two freezers full of meats and poultry, as well as vegetables.

“I've always stockpiled so my pantry was full, and freezer to stay home, so we have.”

The biggest challenge, she said, is grocery shopping. “To Go” times have consistently been unavailable, so they go during senior citizen hours every two weeks.

Another big challenge is socializing, Alstrom said. “It’s really lonely at times. But my husband and I are both survivors and we have fun together whether its cooking or games or watching the birds eat. I am a bread baker so right as this hit, I ordered 50 pounds of flour and 3 pounds of yeast,” she said.

But her husband misses his Wednesday morning coffee time at the Windham Veteran’s Center, and she is missing the Raymond Garden Club, Alstrom said.  Most of all, though, she misses her daughters and grandchildren.  Facing Mother’s Day without them, especially since her own mother died in October 2019 at the age of 101, and her brother passed shortly after, was especially difficult.

“As he and I always celebrated Mother’s Day with our mom together, it is very sad that I will be without either of them and our own family,” Alstrom said last week.

The new state of the world is difficult to process.  “Getting used to this new world brings tears to my eyes as I can't believe at our age, we are not enjoying what we had planned,” Alstrom said.

Yet, there are some bright spots, said Alstrom, who lives in a community on Crescent Lake with the Loon Echo Trust bordering their land. “We see many walkers go by, enjoying their time in fresh air.

A young couple with young daughters from Brooklyn moved into her parent’s vacation home across from us. So, meeting them and helping each other has been pleasant. It’s given us a grandparent feeling,” she said.

The Alstroms set up a vegetable stand this week for neighbors to purchase organic vegetables from their garden.  Last week, they offered parsnips, carrots, Jerusalem artichokes, rhubarb and chives, lovage, tarragon and catnip. “I even have pie crust on the stand for those that cannot find it. It is giving us a purpose now and to look forward to something,” she said.

Alstrom said that any small thing, like getting haircuts last week, taking a ride, or going to the grocery store, is a big treat now.

But even with all the limitations, she said they feel blessed.  “We want for nothing and we have many things to do at home.”

Alstrom added a final bit of advice to remember in this difficult time: “Just stay kind and thoughtful to each other.”

Posted by The Windham Eagle at 2:19 AM