Armed with a menacing frown and a pitchfork, an 18th century Revolutionary War veteran orders a tax collector to vacate his Windham farm

The tax man had just informed Windham farmer Elias Legrow that his cow would be confiscated in lieu of an unpaid tax. The idea didn’t settle well with the Revolutionary War veteran who had just resettled on his farm, intent on resuming his former life. Now he directed the business end of a pitchfork at the visitor, and with an icy stare delivered an ultimatum. Before disclosing how the encounter ended, it’s best to explain the back story. 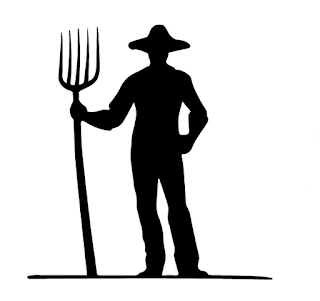 In colonial New England, established religion was, for virtually every living soul, essential and vital. So much so that colonial governments often mandated the creation of a church and pastor before towns and plantations could incorporate. Such was the case with Windham, first known as New Marblehead. Services were held in the old Province Fort; early pastors were John White and Parson Peter Thatcher Smith. Revenue to support the Congregational Church was collected from the inhabitants in the form of a ministerial tax.

The first push-back to the sacred surcharge came with the establishment of the second religious society; the Society of Friends, or Quakers, settled in Windham in the early 1770s, and although the small congregation actually worshipped in Falmouth (Portland), town records reveal that at a town meeting in October, 1774  it was “Voted, that all Persons who call themselves friends or Quakers … shall be Exempted from Paying ministerial Taxes.”

‘Friends’ reasoned that since their church employed no pastor to lead their services, they should not be required to pay the tax.

Returning to our story, it was Isaac R. Jordan, an early Windham history chronicler who preserved the account of this incident. He wrote, “Tradition says that after (farmer) Legrow arrived at his home after helping to free his country from British tyranny (he was) feeding his cow in the yard…a constable appeared and said that he had come to collect a priest tax for Parson Smith.”

Legrow told the man he never heard of or met Parson Smith and consequently should not have to pay the tax. The constable said if he did not receive the payment, he would be obliged to take the cow. Hardened by his years of war service and feeling threatened by the constable’s ultimatum, Legrow grabbed his pitchfork, pointed it toward the man’s torso and exclaimed, “There is the cow. Take it if you dare!”  He further stated that if the cow was touched, he would “put the pitchfork through.” Legrow’s tone and language during the verbal exchange was described as “vigorous.”

The constable is said to have left, without further argument. And the old soldier heard no more of the priest tax.  <