A matter of historical record: Origins of the Cumberland & Oxford Canal – part two of a series 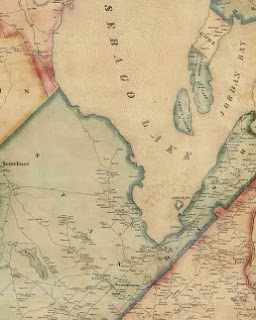 Traveling back roads in the late 18th century was an extremely unpleasant and sometimes dangerous activity. Transporting cargo on the unimproved trails north of Falmouth (Portland), including the Sebago Pond (Lake) area, was nearly impossible. As discussed in part one of this series (The Windham Eagle – July 2, 2021), economic development was stymied by the inaccessibility of inland resources like timber and wood products.

Influential traders and retailers like Woodbury Storer, Peleg Wadsworth and Enoch Freeman foresaw the potential for a lucrative trade in manufactured goods and farm produce, just out of reach in isolated woodlands to the north.


In his book, Canals and Inland Waterways of Maine (1982, Maine Historical Society Research Series, No. 2), historian Hayden L.V. Anderson notes, “By 1790 Portland was recovering from the effects of (the Revolutionary) war and feeling the influence of the new national spirit. A period of vigorous growth began. The town had…been surrounded by forests of towering pine, with ridges of oak, red and white ash, birch and other hardwoods, and settlers along the Presumpscot and Stroudwater rivers had for some time been cutting this easily reached timber…Portland’s splendid harbor and bustling inland settlements provided the setting and opportunity for the rise of an industrious and versatile merchant class.”

However, as Anderson observed, “…roads of the time provided poor freightways.”

Likewise, the Presumpscot River was an equally undesirable alternative with its shallow stretches, rocky obstacles and numerous waterfalls.

The chosen option, born of the trade route dilemma, was a hand-dug canal from Sebago Pond to the falls at Saccarappa (Westbrook), to be known as the Cumberland Canal. Because the Presumpscot did not directly connect to Portland, a second canal group was organized to construct the Falmouth Canal from the head of Saccarappa Falls to the Fore River in Portland. The prime mover of the joint venture was Woodbury Storer, who immediately spearheaded a committee charged with studying the feasibility of creating a “Big Ditch” from “Sebago to the sea.” The panel reported back promptly and enthusiastically, saying that such a canal system would be wise and warranted, as it would extend the region’s economic reach some 60 miles inland.

The Massachusetts General Court incorporated Storer and others as proprietors of the Cumberland Canal. Loammi Baldwin, designer and engineer of the Middlesex Canal at Boston was hired to come and “view the ground” and advise the group. Planning and preparation proceeded slowly; it wasn’t until 1803 that Governor Samuel Adams signed a charter authorizing $20,000 for the purchase of land and allowing up to ten years to dig the canal and bring it up to full use. The following year it became obvious that the initial $20,000 outlay was not enough, and it was increased to $120,000 for each canal company.

In the years leading up to what would have been the Cumberland & Falmouth Canal, it was estimated that Portland’s prosperity nearly quadrupled due to vigorous trade with Great Britain and the West Indies.

In 1806 and 1807, due to international events, the boom times collapsed. Nationwide trade embargos, instituted by Congress, and later by President Thomas Jefferson over issues related to the impressment of American sailors and American sovereignty shut down ports up and down the eastern seaboard.

Gloomy economic times fell on the port of Portland. Commercial shipping and related business interests valued at over a million and a half dollars were halted. One observer quipped, “Great distress prevailed…grass literally grew upon the wharves…”

The disastrous times also brought failure to progress on the Cumberland and the Falmouth canals. Recovery would not be realized for another 20 years, well after Maine statehood.

Next time, the story of the second attempt to construct “water communication” between Portland and Sebago. <
Posted by Ed Pierce at 2:10 AM