Replacing an aging, inadequate facility began with bitterness and vitriol and ended with a labor of love

Although passing without fanfare, 2015 is the 50th anniversary year of the first graduating class from Windham High School at its present location.

Construction began in 1963 following a tumultuous year of acrimony over location and cost. Local newspapers published scores of articles on the agonizing process that epitomized the classic battle between the so-called “old” and “new” Windham. In December, 1962 the Portland Sunday Telegram observed that the bitterness stemmed from the long running feud between the generations of Windham families who felt that their current high school, built in 1910 (which now serves as Windham Town Hall), had been “good enough for them and ought to be good enough for kids today,” and the “outsiders” new to Windham who favored “quality education…and better facilities.” 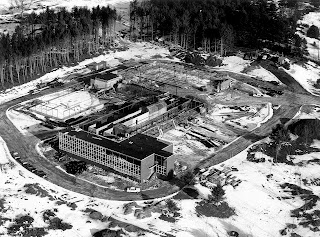 The town’s population had grown from about 4,000 to almost 5,000 souls between 1945 and 1960 and talk of replacing the old wood frame school off Windham Center Road had surfaced numerous times. Attempts to pursue the idea were always voted down. By 1960, 396 students, grades 9 to 12, were enrolled in the 50-year-old facility, designed to hold only 250 pupils; 500 or more was projected for the ’66 – ’67 school year. By 1963, study halls were being held in the back rows of active classrooms and on the gym stage behind a curtain. Double sessions were anticipated for the following year along with the possible loss of state accreditation. The “old” Windham faction, fearing higher taxes, was forced into the fray, quite literally, kicking and screaming. 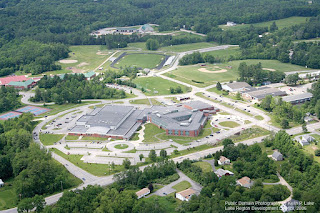 Round one concerned location. Fifteen proposed sites were quickly narrowed to three by the newly formed school building committee. The Allen site (which was ultimately selected) was favorably located in the center of town next to the Field-Allen School on Route 202, but ledge was a cause of concern for water service and waste disposal. The LeGrow site, located northwest on Route 202 near Falmouth Road was an open area that would require little or no tree removal, but was a long distance from the water main. The Libby property on Park Road was initially approved, even though engineers warned that it was uniquely situated and would necessitate costly water and electric connections.

The questions over where the school would be located, how it would be financed and how much of a tax burden it would bring, dominated public meetings for weeks. The Westbrook American weekly newspaper reported on what it called an “unprecedented controversy…neighbors have turned against each other. Old and cordial friendships have gone on the rocks.”

Innuendo, charges and countercharges ruled the debate in local gathering spots, at public functions, as well as public hearings. Four of nine building committee members resigned, a complaint was filed in Westbrook Criminal Court against the building committee for allegedly holding an illegal executive session and, at one point in the controversy, the chairman of the school committee said he received a death threat over the phone. For a time it seemed there would be no resolve, and no new school. In a later editorial, the Westbrook American commented “Few of principals involved have been blameless. Many a conscience will turn in the weeks to come.”

Finally, a referendum vote changed the location from the Libby to the Allen site in one of the highest voter turnouts the town had experienced. But with one issue settled, another arose: Treated waste from the site would be discharged into the Pleasant River. Hundreds of petition signatures from sportsmen’s groups and local residents were presented to the Maine Water Improvement Commission which held jurisdiction over the project. Following river inspections and design reviews, the commission announced it would not allow the introduction of pollution beyond the river’s current high classification.

Questions concerning the selection of an architect, financing and taxes remained. A bitter debate continued into 1963 when it was decided the town would apply for a $1,150,000 loan from the Maine School Building Authority.

Construction began in early spring. By March 1, 1964 at the cornerstone time capsule ceremony, building committee member Nora Branson set a new tone for the construction project that would soon admit 430 students into a new modern school saying, “Today marks the beginning of a good and prosperous community. My job will be grounds…draperies and colors…an exciting labor of love.”
Posted by Michelle Libby at 10:29 PM