While I liked Courtney Maum’s first novel “I Am Having So Much Fun Here Without You”, there were places where I found the main character in that novel a little flat, a little hard to root for. 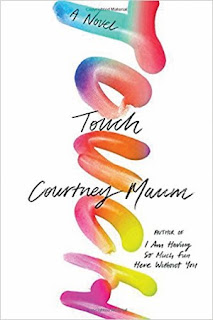 Not so in her second novel. Maum’s “Touch” is a funny, cynical, and honest look at a near-future full of tech junkies. The main character, trend forecaster Sloane Jacobsen, is a full-on pleasure to read. Sloane is smart, funny, and likeable. And the other characters in the book are equally well-drawn and engaging. It’s worth reading the novel just to encounter Sloane’s ridiculous French boyfriend, Roman.

The novel opens with Sloane moving from Paris to New York, to take a job with a huge tech company that advocates and celebrates non-procreation. At first, Sloane gets drawn along - after all, she herself is childless by choice - but, as her personal life becomes more chilly and less intimate, Sloane struggles with the message she has been hired to promote. Despite what everyone else seems to want, Sloane is troubled by the fact that she has lost touch with, well - touch. Her life has become devoid of all kinds of intimacy and her creativity is suffering as a result. When she suddenly receives a creative flash that tells her intimacy is making a comeback, not everyone believes her.

While Sloane works hard to figure out what trends will be a part of the return to intimacy she forecasts, her boyfriend and her boss work to thwart her. Sloane’s path isn’t a startling or even surprising one. But, this isn’t that kind of novel. It’s less about her outward decisions and more about her internal conflict.

This novel is one of those rare occasions where the author is trying to say something important and it doesn’t come across as a lecture. It’s a thought-provoking and interesting book. “Touch” would make a great book club pick.

Join us at the library on Wednesday, October 18 at 6 p.m. for our Movie Discussion Group. This month we’ll be talking about “Arrival.”
Posted by The Windham Eagle at 3:48 PM