On Thursday, January 9 the Windham PTA hosted a public community screening of the documentary Most Likely to Succeed.

The film offered a look back at the historical context of education in the United States, and a look forward at new possibilities. Most Likely to Succeed pointed out how the national curriculum remains largely unchanged since its creation in 1892, and questioned what that means for the students of today. 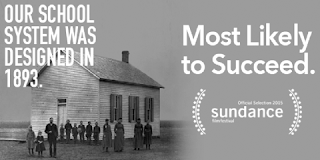 The film profiled an innovative charter school in California, High Tech High, which employs a project-based learning approach to education. At this school, teachers are hired on one year contracts, and are allowed to teach however they see fit. Teachers are facilitators, helping students discover their own capabilities through hands-on problem solving.

There are no bells, no separate content courses. Students learn math, science and humanities throughout the day as they immerse themselves in their projects. They are not graded in traditional ways, but come together at the end of the year to exhibit their work to parents, friends and the community.

Rather than simply being a one-sided portrayal of the positive aspects of this approach, the film also explored challenges and questions that arise when operating in non-traditional ways. But the main theme throughout is that the skills students need for employment are not the same as those in the industrial age. And the current methods many schools follow are teaching students to memorize and test, rather than giving them crucial “soft skills,” including problem solving and working collaboratively, that many modern jobs require. 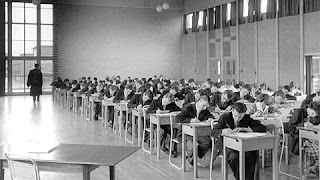 Amander Wotton, president of the Windham PTA, said that Windham Primary School principal Dr. Kyle Rhoads introduced her to the film. Interested in learning more, she got a license to preview the film at her home. “When I saw it, it changed my concept as a parent, as an educator, as a nurse, and as a person,” she said. “We need to step up as parents, as educators, as community members and as a whole system. We need to be able to prepare our students, our kids, to live. That’s why we wanted it here,” she added.

Wotton said she hopes the screening gets people talking. After the screening, Dr. Rhoads facilitated a discussion about the film and education in RSU14 among those in attendance. Wotton hopes this conversation continues. “We want people to just talk, to shift thinking. It’s going to be a slow process, but it’s got to start somewhere. Change starts with one,” she said.

Although a community screening isn’t inexpensive, the PTA did not charge for the event. In fact, they paid the screening fee before they knew the Superintendent’s office would chip in half the cost. “We thought it was an important enough message to not let cost be a barrier,” said Wotton.

Most Likely to Succeed is a powerful film about reinventing education and helping students become confident, independent learners. The film is only available for viewing at a community screening or as part of the non-profit’s 50-state tour, which includes a Q&A with executive producer Ted Dintersmith. A community screening is scheduled for January 27th at Biddeford Middle School. All scheduled screenings are listed on the website www.mltsfilm.org.

Posted by Michelle Libby at 4:08 PM