6-year-old gives up toys in favor of helping animals 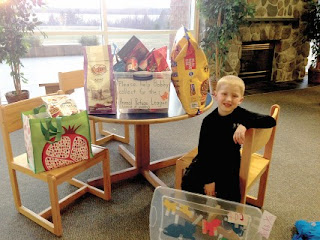 This past weekend Robert "Bobby" Grindel turned 6 years old. He had a splash party at Saint Joseph's College with family and friends, but collecting food for The Animal Refuge League was his focus. After adopting a black kitten, Gwenivar, from the shelter, he was upset that there were animals left behind. He got the idea to collect food and accessories for the animals in lieu of presents.


"I have enough toys, the animals need stuff," Bobby said. So, he included a dog-shaped note inside the invitation requesting animal donations. He readied a large collection box and wagon covering them with animal shapes made on his mother's Cricut machine.