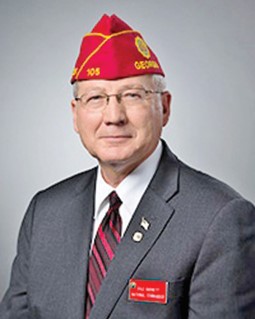 Dale Barnett, National Commander to The American Legion is on a two day tour of legion posts in Maine on the weekend of April 2 and 3.  Commander Barnett, who was elected national commander of the 2.2 million-member American Legion on Sept. 3, 2015, will kick off his legion post visits in Maine with a National Commanders Breakfast at Windham’s Field-Allen Post 148 at the Windham Veterans Center. The Commander is coming to the Windham post as a meet and greet and to recognize the post and some of its members for the exemplary work they are doing in the support of Veterans and the community. The breakfast will run from 8:30 a.m. to 10 a.m. on April 2nd.

This is a great, once in a lifetime opportunity, for local veterans and post family members to meet their National Commander. The commander will visit several other posts in Cumberland County on Saturday ending with a National Commander’s Dinner at the American Legion Post in Naples. Contact Post Adjutant for additional information at 892-1306.
Posted by Michelle Libby at 2:00 AM